1820 – Aspirations for a Canal or Railway to Market Lavington

The village of Market Lavington, about 5 miles south of Devizes in central Wiltshire, nestles in a gault clay valley between the escarpment of the chalklands of Salisbury Plain and a greensand ridge. Before the army took over Salisbury Plain for training purposes, the old main road from Devizes to Salisbury went through the village and up White Street and the steep hill onto the Plain. This could never have been an easy journey for horse drawn vehicles. In the opposite (north westerly) direction, there was the sunken road through the greensand to negotiate. Routes along the valley floor were flatter. 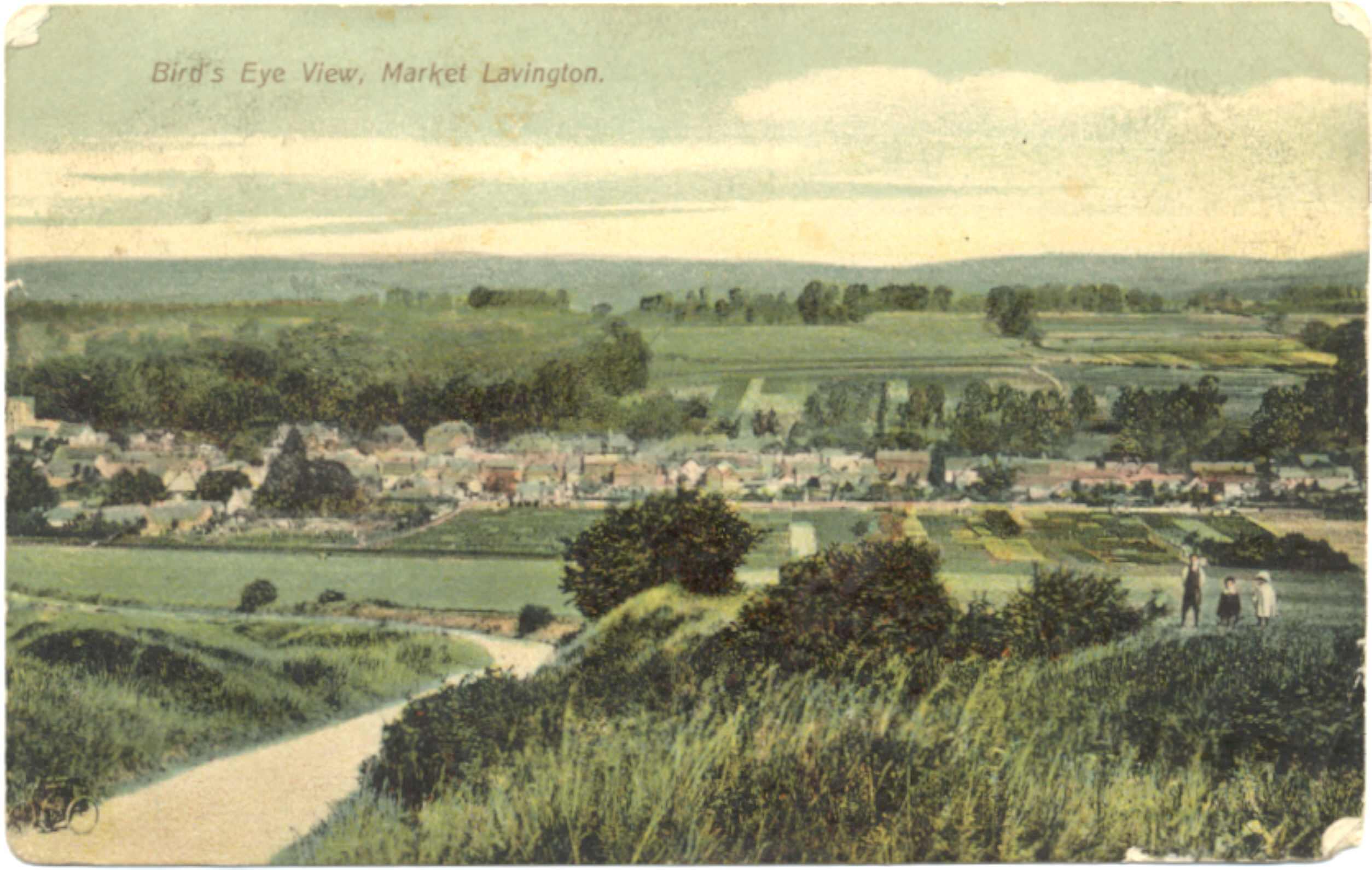 1907 NW View from Salisbury Plain, across village to greensand ridge

The topography and state of the roads have had implications for local industry and its transport links over time. For instance, in the 1660s, bricks from the brickworks along the Broadway had to be taken away by horseback between Michaelmas and Lady Day, as carts were not permitted during those six winter months.

In the 1840s, William Cambridge made agricultural steam engines and other equipment here, but had to move from the village to a site nearer the docks in Bristol to facilitate selling them worldwide. See William Colbourne Cambridge

In 1852, James Neate established a successful brewing business here, but only came because he believed that a railway station was to be built on Church Street. See JAMES NEATE (1829 -1920)

Which brings us back to the

which has featured in Market Committee Report – 1820. The committee felt that all the wheat was selling well, but there was a problem due to a surfeit of barley.

The hill lands on Salisbury Plain were suited to sheep farming and barley production. This latter gave rise to a large number of maltings in the village, including one in the Market Place and one behind the Workman’s Hall. See Malthouses and Behind the Workman’s Hall. Malt for brewing was made by soaking and germinating barley corn for about six days and then drying it with hot air. The family at the White House on White Street ran a wagon delivery service carrying malt to London. The last malthouse here closed in 1883.

The 1820 report stated that ‘from the great quantity of Barley grown at Lavington, and its vicinity, there appears to be a want of purchasers … and the market will not expand to the magnitude desired, without a Canal or a Rail Road, to join to the Kennet and Avon Canal.’ It suggested that the 12,000 inhabitants of over twenty villages in the area, including, the Lavingtons, Imber, Netheravon and Amesbury, would all want to buy coal in Lavington if it could be transported here. Figures were quoted in the report for how much could be raised at 2d per ton per mile if canal or rail transport were available to move grain, coal, coal ash, flour, iron and groceries. Often 4d per ton per mile was charged on turnpike roads. 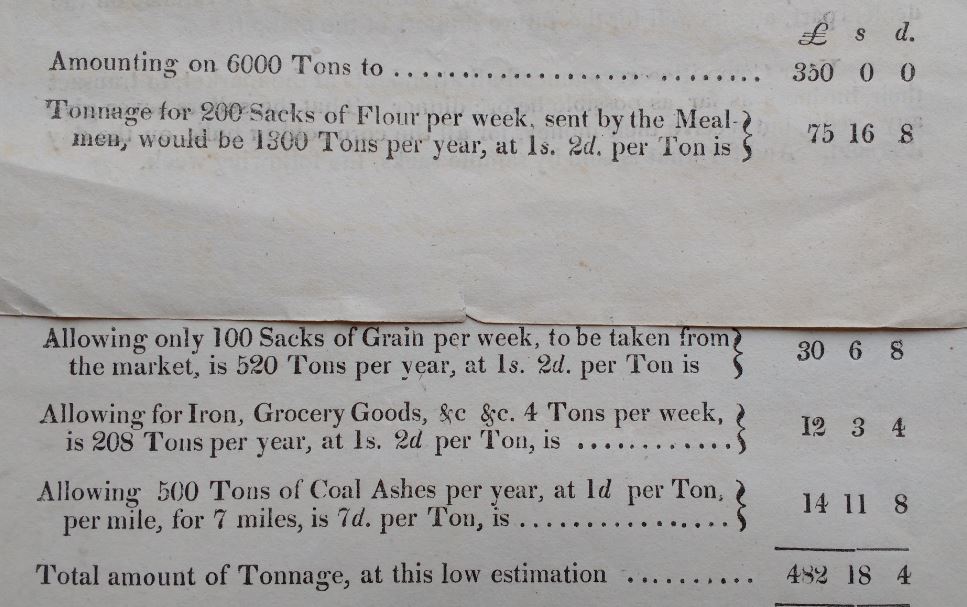 A three man deputation was chosen to ask the managers of the Kennet and Avon Canal to see if they would ‘assist in the projected Canal or Railroad’. 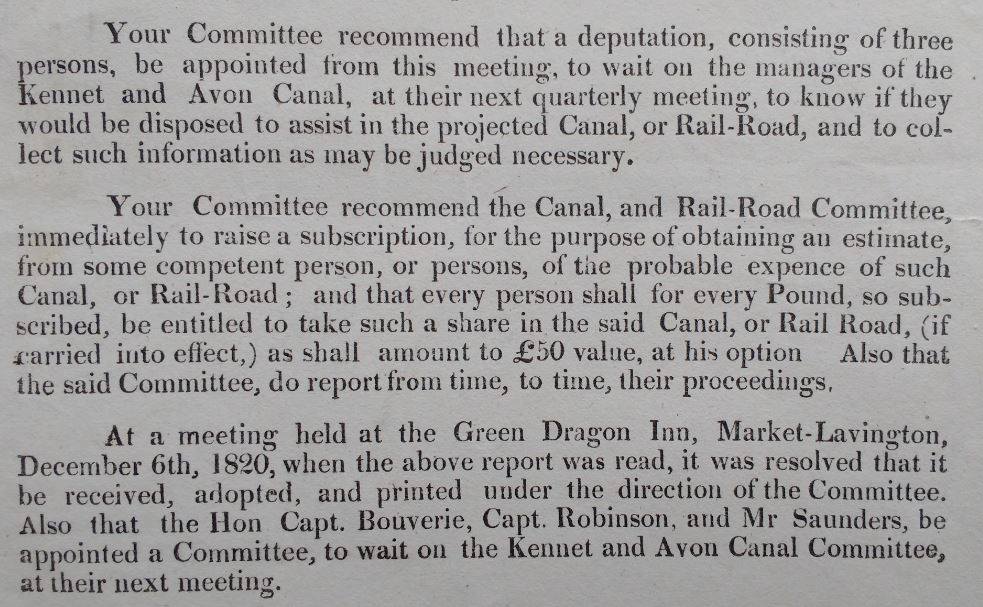 The canal through Devizes had opened in 1810, improving the ability to transport heavy loads despite the 6 hours taken to go through the 29 locks in the Caen Hill area. The railway through Devizes only opened in 1857. The hopes of the Market Lavington Market Committee must have been dashed. The canal never came here. Eighty years later, in 1900, we did eventually get a Lavington railway station, just north of West Lavington. This closed in 1966. See Lavington Station – a new photo

Now, 200 years after the Market Committee report, there will be a feasibility study to assess whether we could have a new station, not in our village, but a few miles away at Lydeway, east of Devizes.