This is a follow up to yesterday’s post in many ways. The coronation in 1911 clearly was not in the Edwardian era for it was near the start of the reign of George V. He came to the throne in 1910 on the death of his father, Edward VII and so technically it was a new Georgian era. But a photo of coronation festivities, in Easterton, in 1911 can be compared with the photo at Paxtons and we can see similarities in fashions. 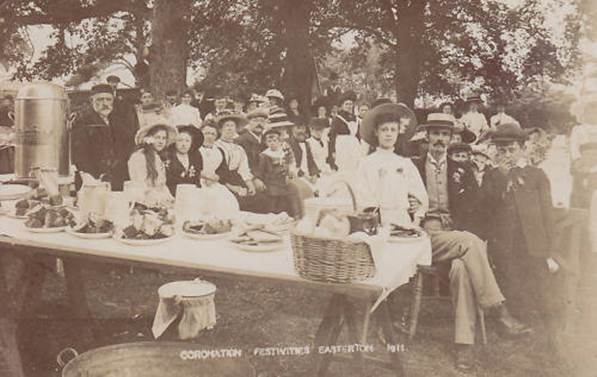 Celebrating the 1911 coronation in Easterton

We can see as clear as you like, men in straw boaters and women in big hats. The card is clearly captioned so we know this is 1911.

Having said that, the item which catches our eye is what looks to be a water dispenser at the far end of the table. Did this provide hot water for tea and if so what powered it?

Once again we can’t name people. Who knows, though, somebody might.