We have recently received a little booklet of bus and train timetables for the Devizes area of Wiltshire at the end of the second World War. 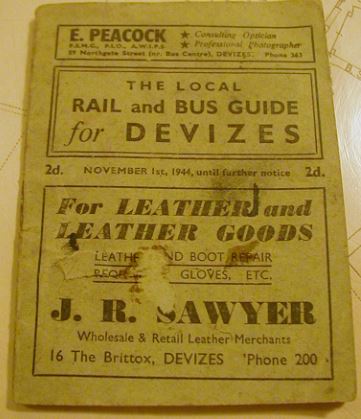 At the museum, we are particularly interested in the bus services linking Market Lavington and its neighbour Easterton with our local market town, Devizes.

Service 41 was run by Bath Tramways and took the route through Potterne and West Lavington, terminating at the Royal Oak pub in Easterton, or occasionally running through to Easterton Sands. The buses ran approximately every two hours, but not on Sunday mornings. Care would have been needed to check the times of the last bus home – 8pm or 9 pm depending on the day of the week. 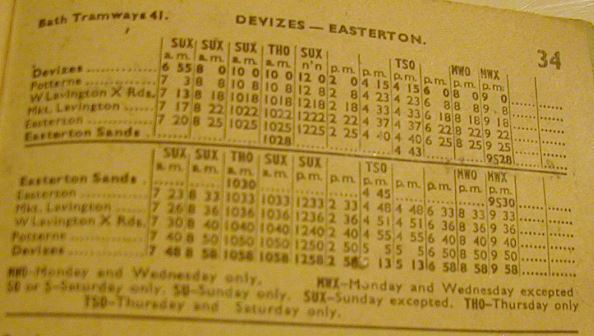 Whilst this was the only route serving Market Lavington, the Wilts and Dorset company also put on a service for Easterton folk to visit Devizes on Thursday (market day), on Saturday and on Sunday afternoons. 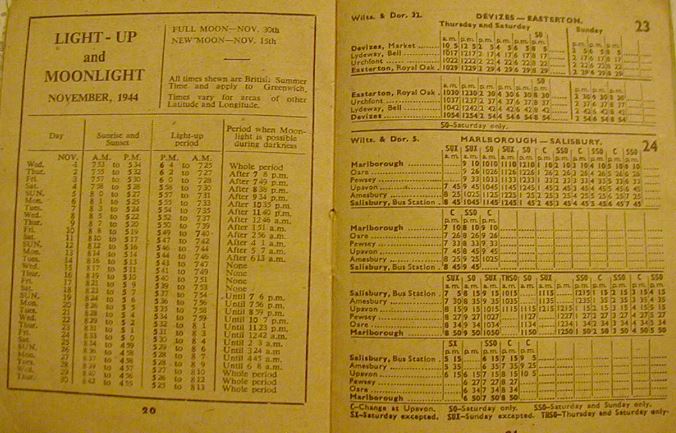 Interspersed with the timetables are local advertisements (unfortunately none from our villages) as well as a calendar for November 1944 and the light up times for the same month.

Between 1940 and 1947, daylight saving measures meant that Greenwich Mean Time was not used. That is why page 20 of this booklet refers to British Summer Time for November. In the summer, the clocks would go onto double BST, two hours ahead of GMT. As a blackout was in force during the war, the nights of possible moonlight would have been important to know. Maybe the lighting up times refer to when you could use car headlights and essential external lighting, but these would have been fitted with louvres to deflect the light downwards. We have an example of such a headlight deflector in the museum.

We will look at the train timetable from this booklet on another occasion.