Views from satellites are now a commonplace since we have them readily available on the internet. In the 1950s we had to have views from aeroplanes and that involved photographers and purchasers of photographs in huge expense. No doubt launching satellites is hugely expensive, but it seems we, the end users, can see them for no costs additional to those involved with being internet users.

The military were keen, from early days on photos from the air. We have a large one covering Market Lavington and this is just a small part of it.

Here we are looking straight down on Northbrook Close. The T shaped road was made of concrete and its white surface shows up well. We can clearly see that the council built housing was spaciously laid out. Back in the 50s people were expected to grow their own food on a good scale.

The road called Northbrook runs more or less straight up and down in this photo. In the top right hand corner, the line of trees masks Spin Hill.

Footpaths show up. The one leading off to the right from the end of the T of Northbrook Close looks particularly well used. Of interest is the footpath which runs parallel to, and a little to the right of the Northbrook road. Parts of that path still exists but are little used these days.

For comparison this is the same area from a modern satellite picture. 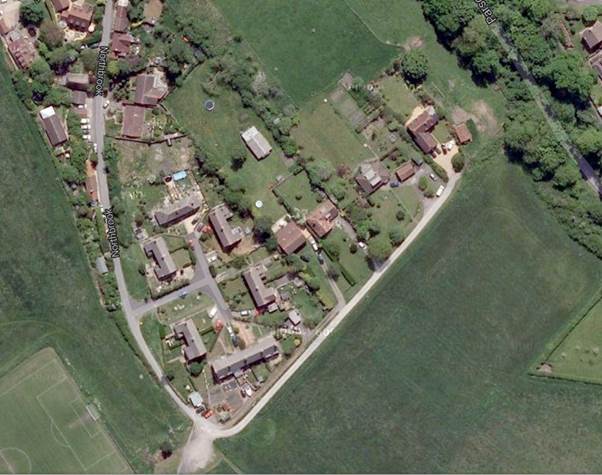 A similar view from a modern satellite image

We can see many new houses and, of course, cars. We can see the Davis football field has been created. Footpaths are still reasonably well used although new, unofficial ones have been created by dog walkers who go around the edges of fields.

We wonder what it will look like in another 60 years time.