The 1954 directory, recently given to us by the Williams family of Easterton contains more than just lists of names. For starters there are period adverts although only one seems to refer to a Market Lavington business. 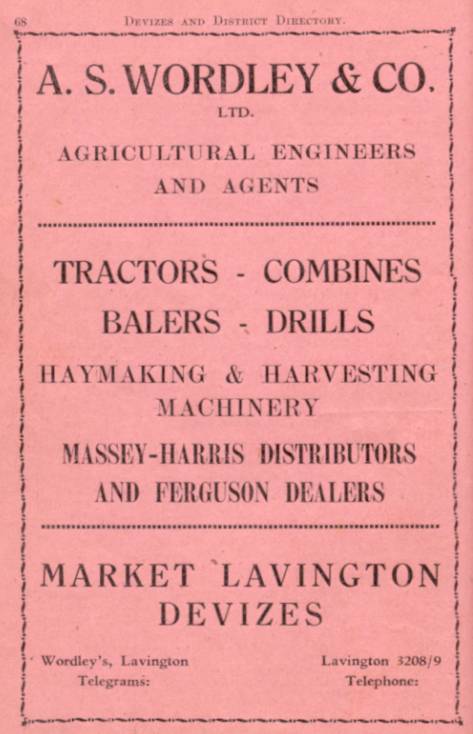 Wordleys had premises in the Market Place. When this area was redeveloped in the 1960s, the firm moved to occupy the area where Rochelle Court now stands. The company became Wiltshire Agricultural Engineering.

But back to the directory, which was published by the Wiltshire Gazette and contains little bits of information from the period covered.

Here are some entries which refer to our area.

May 14th 1953 – Rev. J. S. Arthur (Vicar of Market Lavington and Easterton) announced that he had been appointed to the living at Beaminster, Dorset.

July 21st 1953 – Presentation of set of cutlery and dinner service to Mr E. J. Stowe, headmaster of Market Lavington School for 16 years to mark his retirement.

August 5th 1953 – Ninety-five year old George Dobson, Market Lavington’s oldest inhabitant, pleaded ‘Not Guilty’ to driving his motor cycle without due care and attention and was ordered not to drive again.

How lovely to have these snippet length reminders of almost 60 years ago. But this was the 89th edition of the Devizes and District Directory. Has any one got any earlier editions they could give to the museum?