Mother’s milk is usually deemed best for babies, but for some alternatives may be needed and there are plenty of commercial firms who fill the need with formula milk powders. One such company – known for generations – is Cow and Gate. That company had origins as long ago as 1771 when the Gates family opened a grocery store in Guildford. The Gates family turned their hand to milk drying and this became big business – a business involving the cow and the Gates. It was 1929 when the name Cow and Gate became the company name.

At Market Lavington Museum we have a small measuring spoon presumably given by Cow and Gate to aid reasonably accurate measurement. When mixing milk it is important to get the right amount of powder to liquid. Too little powder will mean baby doesn’t get enough of the growth giving ingredients but too much is worse, for the thick liquid doesn’t flow and baby tends to get very little before being worn out by the effort of trying.

Here is our spoon. 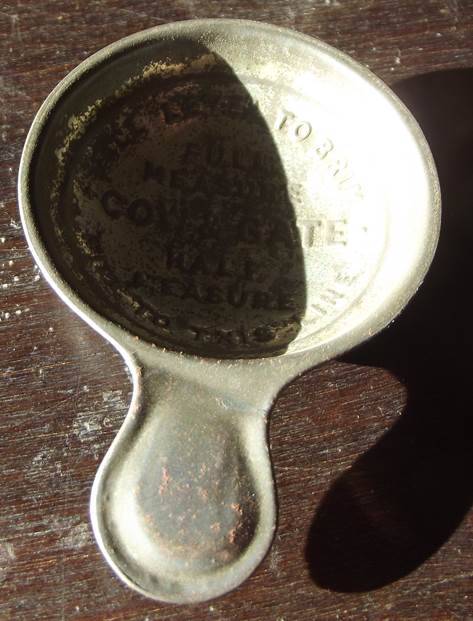 This spoon was another of the items which our founder at the museum, Peggy Gye, bought at a jumble sale in the village. It dates from the mid-20th century and is thus about 70 years old now.

The shape and light made it a problem for us to read the writing on a photo, so we resorted to taking the underside of the spoon where the writing is, of course, reversed. But we can digitally reverse the image so it looks right. 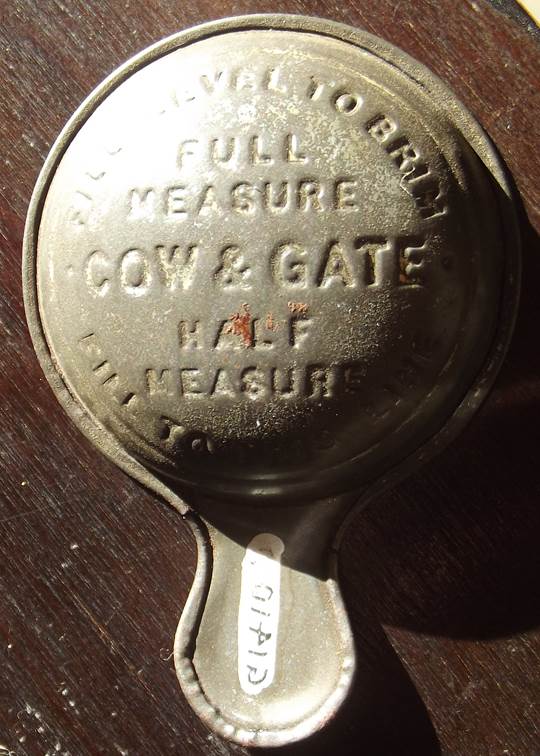 The writing embossed in the spoon – made readable digitally

From the underside we can see this is a cheaply made item pressed out of tin plate with edges crimped over for safety.