Market Lavington Museum does not have water laid on to it. It never has had this vital fluid, even when it was a lived in cottage, through into the 1950s. It never had a flush toilet and still doesn’t. Visitors need not worry, for we do have access to an adjacent community building which does have these facilities.

But it can remind us, that lack of water and internal flush toilets was the norm within living memory, for older Market Lavington and Easterton residents.

Householders had their emergency items – a potty under the bed which was often called a ‘guzunder’. Nobody wanted to walk down the garden in the middle of the night. Then, for people who were bed ridden, there was the bedpan. 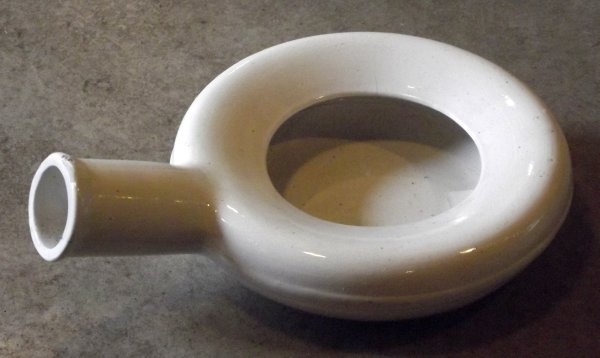 This bed pan dates from the early twentieth century and is clearly a mass produced item. It is a ceramic bedpan, predating enamel or stainless steel devices.

The hollow handle may have been used by urinating men, but its main function was for emptying the contents and washing out the pan.

This bedpan was given to the museum by a White Street (Market Lavington) family.