We are, once again, back to that favourite of Market Lavington Museum – a found under the floorboards item. Like several other items this was found at 21 Church Street which was once the HQ of the Hopkins building and ironmongery business. This item may have been part of a shop bell system or it could have had a purely domestic function.

This is the object. 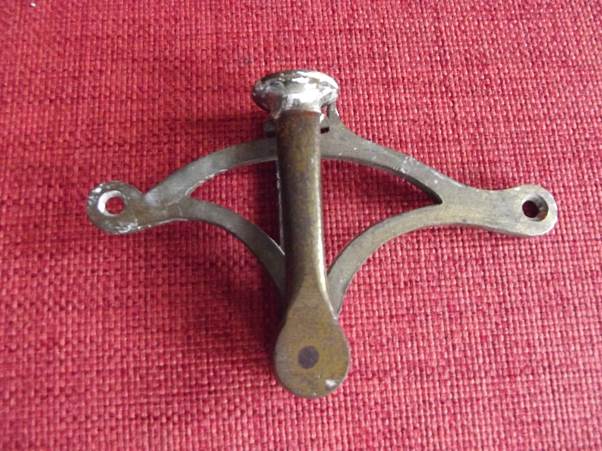 The pull string or wire would have been attached to the right hand end. It could have had a vertical or horizontal pull. The wings are heavily sprung which would have pulled them back to this position after a pull. The top of the object has a moderate cover of white paint. It was almost certainly made with a screw end above the white plate but a builder has removed this from its fixing by sawing through that. It is visible as a central steel core in the middle of the brass work.

The fixing screw has been sawn off!

It stands to almost certain reason that the final bell would not be in line with the pull, so a wire would work its way to the bell, using pulleys or devices similar to this one (but probably unsprung) to negotiate corners.

We are fairly sure this is Victorian – probably late Victorian but it is possible to buy similar systems today.

We’d like to thank Bob for finding and donating this fascinating and clever piece of bell system engineering.