The bike has been around for a very long time. Even the so called Safety Cycle, forerunner of today’s technological two-wheeled wonders, has been around for 130 or more years. They represented a form of transport with minimal running costs yet capable of going much faster than people could walk. They were an ideal machine.

The Merritt family of Market Lavington were fairly quickly into bike sales. Today we feature an advert they placed in about 1915 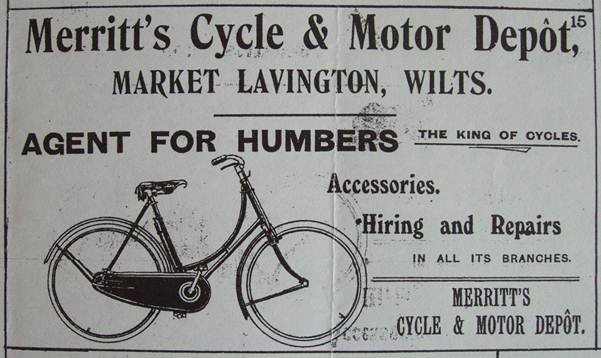 Merritt’s of Market Lavington advertise Humbers – The King of Cycles

It’s of interest that they show a lady’s bike but then in 1915 many men were struggling in the mud of France and Belgium. At this time Merritt’s were agents for Humbers, described as The King of Cycles.

Humber was one of the biggest manufacturers of bicycles in around 1915. They were eventually bought out by Raleigh.

Merritt’s of course continued as Raleigh agents from their Church Street premises but no doubt the motor side of the business got more important as people turned to powered transport.