A Bill from Alf Mullings

The Mullings family came from Devizes. William settled in Market Lavington in around 1870 and set up his basket making business which his son, Alf, continued and then Sid, Alf’s son also carried it on until around 1960.

Recent evidence suggests that the Mullings or Mullins tribe of reed and cane workers became more widely spread. Well we know there had been one in Easterton in the 1850s, but others can be found in East London and Suffolk in the nineteenth and early twentieth centuries.

We recently had a chance to copy a bill sent by Alf Mullings. It dates from 1908. 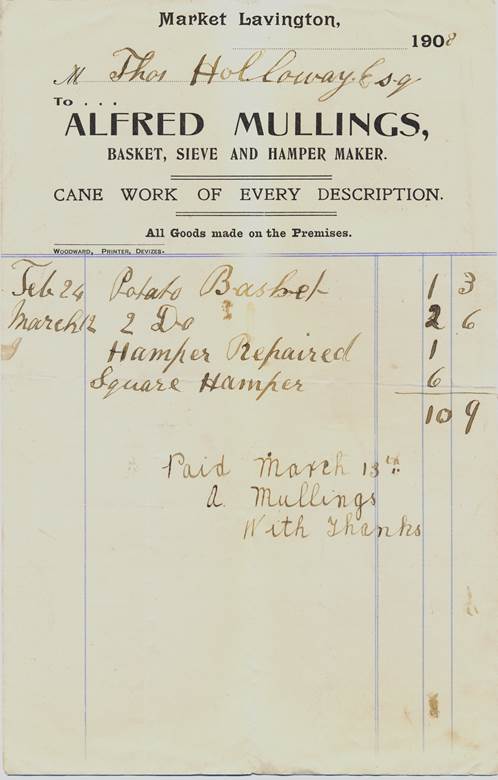 This is a fascinating document giving an insight into prices and information about a lost local craft.

We can see that Alfred had made and sold two potato baskets for half a crown. In modern money that’s about 6p for a basket. However, a square hamper cost six shillings or 30p in present money.

A hamper was deemed worthy of repair as well for just a shilling or 5p.

These prices sound absurdly cheap and we don’t think Alf Mullings made much money on the deals.

Of course, the bill head is interesting, indicating that Alfred did cane work of all descriptions and giving a mention to baskets, hampers and sieves. A basketware sieve by Mullings would make a fine addition to opur collection. Has anybody got one?

The purchaser in this case (as with a large collection of local bills and letters) was Mr Holloway of West Lavington.

What a great item and our thanks go to Tim for making this and the other bill heads available to us.