The Bodman bus and coach company was based not in Market Lavington but in a neighbouring community called Worton. It is actually sad to relate that it has recently closed down. It seemed to have been going for ever.

Our interest stems from a photo we were recently given. It came in a little collection all found fifty years ago in a house in Parsonage Lane which once belonged to the Cooper family.  The other photos were all of places and people in Market Lavington but this picture, of a bus presented a problem because we couldn’t identify it. 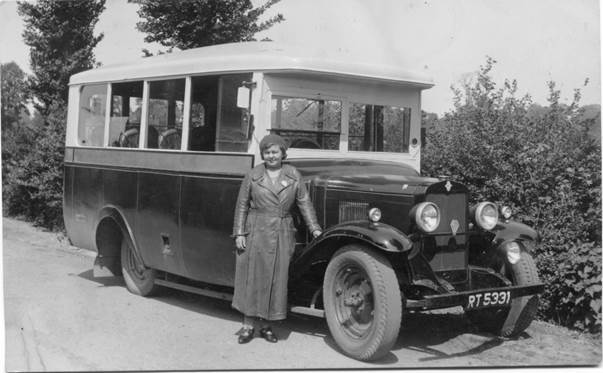 It is a lovely photo and people with more bus knowledge than us have traced its full history. And here is the bus history.

It is a Chevrolet LQ (chassis no. 50333) with 14 seat bodywork by an unknown manufacturer. It was delivered new in March 1929 to W V Edmunds of Shotley, in Suffolk. The bus was acquired (probably with Edmunds business) by Eastern Counties Omnibus Co. in August 1929 and numbered H137. This vehicle was withdrawn in December 1932 and passed in the same month through the hands of three dealers – Leyland Motors, Wintour of London and H. Lane of Chelsea, SW10. It was acquired by Lloyd Cinemas Ltd., London in April 1933. Then it was sold to C. Bodman of Worton in October 1934. The final knowledge is that it was converted to an “agricultural tractor” in May 1940. The lady is probably either a member of the Bodman family (she wears a Western Traffic Area driver’s badge) or one of their staff.

Local people are fairly certain that the driver was Lil Bodman who remained a bus/coach driver into the 1970s.

So the only question to answer now is what the connection might be with the Cooper family and the house in Parsonage Lane where the photo was found.