A Card from Market Lavington to Canada in 1914

1914 was the opening year of World War I. George must have been one of the first Canadians to come over to join the allied army for he sent a card back to Canada, which was posted on 7th October 1914. Of interest is that the stamp is franked with a Pond Farm Camp mark and that is where George addressed his card as being from.

But let’s look at the image first. We have seen it before on a card we believe was sent by the lady of nun-like appearance in the picture. Click here. 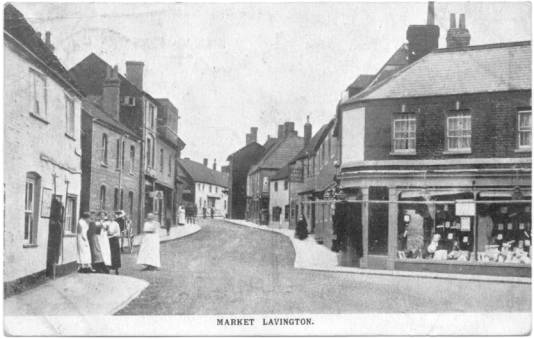 The view is taken ‘at the crossroads’ or Lamb Corner. The white building on the left was demolished to improve visibility for car drivers at this junction. The third lady from the left, in the group outside this house bears a strong resemblance to Rose Polden who ran a dressmaking business just around the corner on Parsonage Lane. The other ladies may well be her employees.

The now demolished house completely hides what is now the Post Office. Right at the far end on the left we are looking at what became Mr Hobbs’s shop and later, The Midland Bank.

On the right side of High Street we have a part of Mr Walton’s empire close to – where the hairdresser operates today. We can see the sign for the Kings Arms and can make out a Singer Sewing Machine sign on the corner of Chapel Lane – where the fish and chip shop is. Back then, it was Mr Elisha who had the haberdashery business.

The message gives a little of the impression that one Canadian soldier had of the area.

Card back - just what did a Canadian soldier make of Pond Farm Camp and Market Lavington?

He was clearly not impressed with Pond Farm Camp. His message reads:

We are moving away from this awful hole on Monday, to Bulford Barracks. It has poured rain today. The ground and ?tent? and mud up to the ankles – awful mess.
I have been in this town twice. Old fashioned and quiet and pretty.