The sealed box into which a householder put money for a chosen charity, used to be a part of life for many people. Each year there was what may be called a grand opening day which revealed just how much money had been put in the box and could go to the charity.

We have just been given such a box at Market Lavington Museum. The charity was the London City Mission which was supported by members of the local Congregational Church.

The box is a simple wooden affair, with each side having a photograph stuck on which explains the needs and functions of the Mission. 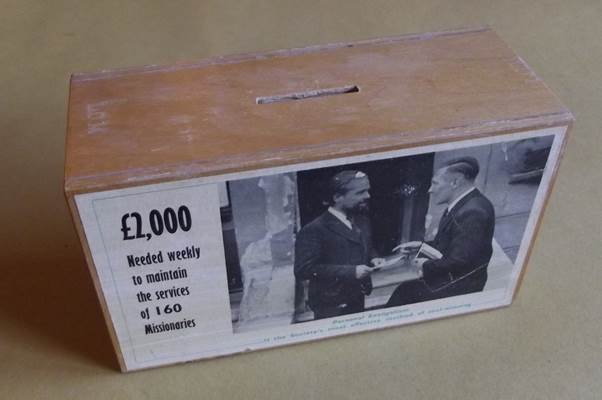 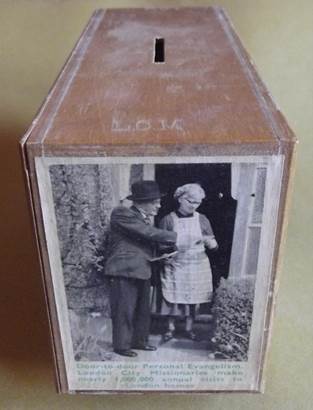 Each side has a photo and information about the Mission

From a village point of view it is the bottom which is most interesting for it has the local names of box holder and the local secretary.

The box holder was Mrs Bishop and this is none other than the former Miss Draper who received that odd message on a postcard of the Robbers’ Stone which we saw just a few days ago.

The box had last been opened on 21st March 1968. By this stage Mrs Edith Bishop was well into her 80s. It seems she had collected thirteen shillings which is 65p in present money. It may not sound much but as an elderly pensioner Mrs Bishop probably had very little to spare. Incidentally, thirteen shillings works out precisely as 3d per week.

The secretary was Anna A Hopkins. The Hopkins family were long time members of the Congregational Church in Market Lavington but it seems Annie was a Devizes resident and was the collection secretary for a wide area around Devizes.

What an interesting little addition to our collection.