Once upon a time, when the cooling system in a larder as no more than a heavy stone shelf, it was essential to keep food covered. Cheese which used to be a cheap staple for many a household was kept in a cheese dish. This consisted of a more or less flat china base with what was often an ornate lid over the top.

We have such a dish at Market Lavington Museum.

This dish was made by the firm of Ludwig Wessel in Bonn, Germany. There is a maker’s mark on the base. 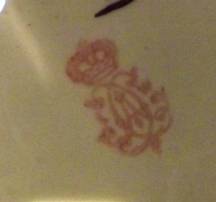 This mark was used by the company between 1875 and 1900. Our cheese dish was made between those date.

It was used by the Gale family in Market Lavington. Henry Gale, head of the family was a plumber and painter. The family home was on High Street – towards what is now the Fiddington Clay end of it.