The crotal bell is one kind of sheep bell. Bells were worn by some sheep in a flock, particularly (in the parish of Market Lavington) if the flock roamed on Salisbury Plain.

The reason for sheep bells is disputed. Some say it was to help a shepherd find his flock if he couldn’t see them, but others say a good shepherd would not have let the sheep out of his sight. Another idea is that a working shepherd, who could see his sheep, got a warning of the sheep getting disturbed if he heard more bell ringing. Yet another theory says that shepherding was a lonely life and the shepherd just found that the sound of the bells offered some company. 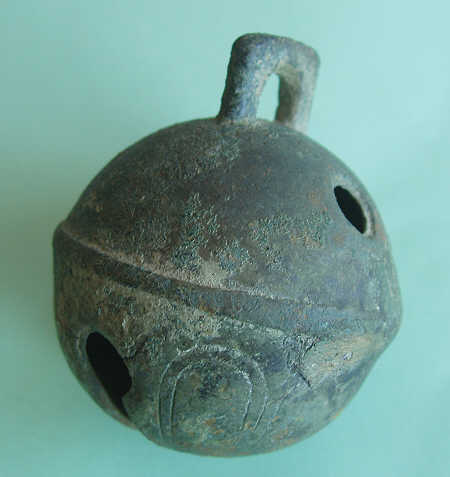 This bell was found by a local metal detectorist. Market Lavington Museum know where it was found. People who use metal detectors can meet with disapproval but we work with a local enthusiast. The arrangement works well for all concerned. The bell was given to the museum just a couple of days ago.

The bell was almost certainly made in Aldbourne in northeast Wiltshire at the foundry of Robert Wells. If so it dates from about 1780. However, the Whitechapel foundry bought the Robert Wells moulds. This means it is possible that the bell was made in East London in the nineteenth century.

The bell measures about 5cm across but is similar in idea to small jingle bells. A metal ‘pea’ is contained within the bell and the sound is made as this ‘pea’ moves about. Our bell is still in good sounding order