This photo has been given to Market Lavington Museum very recently. The donor knew it was taken at Clyffe Hall, along The Spring, but had no idea when or why. He didn’t name any of the people. We guessed it was in the 1950s, for the clothes looked like that era. 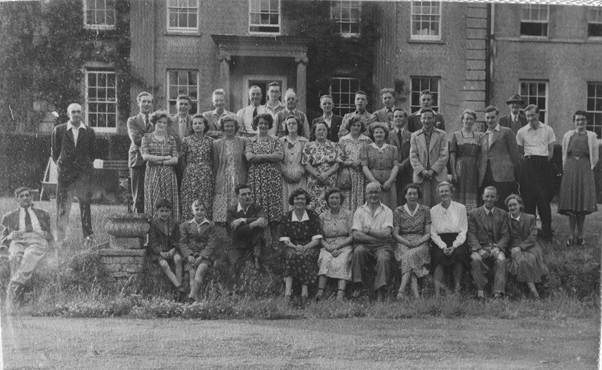 We took the photo to Pat and she was able to furnish us with quite a bit of information. Dances were held quite regularly in the early 1950s and the attendees quite often were lined up for a photo first. This was one of those occasions and was definitely in the early 1950s.

Pat then went through the photo, naming people.

We’ll start with the back row, from left to right. First is Percy (known as Perce Webb who came from Easterton. The next two men are not known, but Pat said they came from West Lavington. The fourth man is Raymond King followed by Jim Gye who lived up Drove Lane at Homestead Farm.  After him we only got the name John and after him came Charlie Batt and Eric Pollard. The next chap was Don Baker and we must record that he recently died down in Cornwall. He and wife Mo moved there some years ago. We now reach the tenth man from the left and he was Frank Phillips who came from Marston. Next we have Gordon Baker who was Don’s brother. The last man at the back, wearing the trilby hat was one Pat couldn’t recognise.

So to the middle row where the first young lady is Pat Hobbs – the very same Pat we were getting information from. Next to Pat is Ada Askey and then Mrs Kyte from West Lavington. Fran Francis comes next.  The following two we just have as Maureen and Maureen’s mum. Then we have Sally Buckland and Annie Buckland who was Sally’s mum.  The first man in this row is Geoff Alexander and next to him is Vic who came from Potterne. Then we have Joan Baker who married Ernie Tilley of Potterne. The final two are not known.

Now to the front row sitters. At the extreme left is Ron Francis of Grove Farm (his wife, Fran, was in the middle row) and next is one of the Francis sons. The other lad is Ray Chapman. Next is Bill Askey (his wife Ada was in the second row). The first woman in this row is Mrs Webb, wife of Perce at back left. Then we have May Proust. The Prousts ran the shop on Church Street which later became the Spar and even later Dempseys. Then we have Harry Hobbs in the short sleeved shirt. His shop on High Street was more or less opposite The Green Dragon and he was Pat’s father. Next to Harry is Mrs Davis who lived at Palm House on High Street and then we have Mrs Gye, wife of Jim of Homestead Farm. The final two are Mr and Mrs Dodge of White Street in Easterton.

How lucky we are that we have friends in the villages who can turn an almost unknown picture into something so fully described. Huge thanks go to Pat for naming so many of the people.