A day out in Weymouth

The 1920s are well known as the era of the ‘bright young things’, the very wealthy youngsters who spent their lives partying and generally upsetting their parents with their wild antics. But for the majority of people, life was simple and basic with very few treats to brighten the year.

Maybe Market Lavington was lucky, for in that decade, Fred Sayer’s Lavington and Devizes Bus Company ran regular charabanc outings. And just occasionally, local people could enjoy a day at the seaside.

Of course, it was important to look smart and proper on these occasions. Adults kept themselves well covered. A gentleman wore his three piece suit whilst a lady wore a demure dress and a hat. Children were allowed rather more freedom.

Our picture today features George and Mabel Cooper and a couple of youngsters  on the beach at Weymouth. We see a family just like that depicted in the previous paragraph. The picture is dated 5th July 1925. 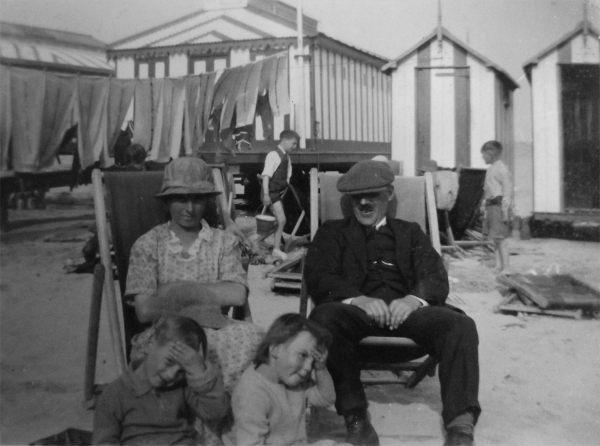 Mabel and George Cooper plus two youngsters. This Market Lavington family were photographed at Weymouth in 1925

George Cooper was born about 1887 in Market Lavington. His father was James, the coal merchant and farmer who lived on Church Street.

George married Mabel Brown, a Connock girl, in 1909 and by the time of the 1911 census the couple and their first born daughter were living on Church Street. George was a groom.

A number of children were born in the next few years but we are not sure that both girls in the photo are children of George and Mabel.