A letter at Market Lavington Museum indicates that a diamond wedding took place. 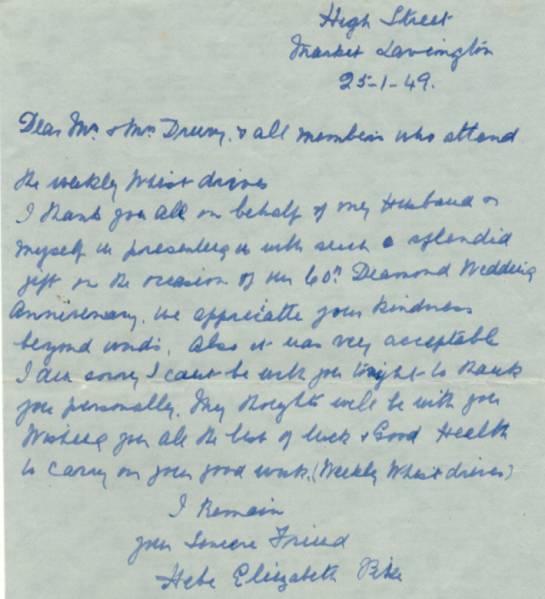 Letter from Hebe Pike to her whist playing friends, thanking them for a diamond wedding anniversary present. The letter is at Market Lavington Museum

Hebe Price, who wrote the letter, was born in Easterton in about 1872. Her family were probably reasonably prosperous for at the time of the 1881 census her father Richard was farming 70 acres and employing two men. Mind you, Richard and wife Elizabeth did have seven children to feed and the oldest two may well have been the men employed on the farm. All of the children, like their mother, had been born in Easterton.

John Pike (his forename of Edmond didn’t seem to be used) was a couple of years older than Hebe and was born in Chitterne but by 1881 the Pikes had moved to Easterton where father Sidney carried on his trade as a wheelwright and carpenter. He and wife Harriet had six children at home. Perhaps Harriet’s father, John Trowbridge brought some money to the household, for he was there as well.

John and Hebe married in January 1889 and in 1891 they lived on Oak Lane in Easterton with one-year-old son, Sidney. John, like his father before him, was a wheelwright.

In 1901 The Pikes lived at Coulston. John was a wheelwright working on his own account. He and Hebe now had four boys.

By 1911 John, Hebe and two boys were living in Market Lavington. John’s occupation was given as a carpenter.

As we saw in the letter, the couple celebrated 60 years of marriage in 1949.

Hebe died in 1953 and was buried in the churchyard at St Mary’s, Market Lavington on the 14th May.

Edmund John Price died in 1955. We have no record of where he was buried.