Time was when you needed a licence for many things. Keeping a dog was one of them, and some might say that would still be a good thing. In fact, if you happen to live in Northern Ireland then you still have to have a dog licence but for the bulk of the United Kingdom dog licensing for all ended in 1987.

Realising that this was something passing into history, the Gyes passed their final dog licence to the museum. 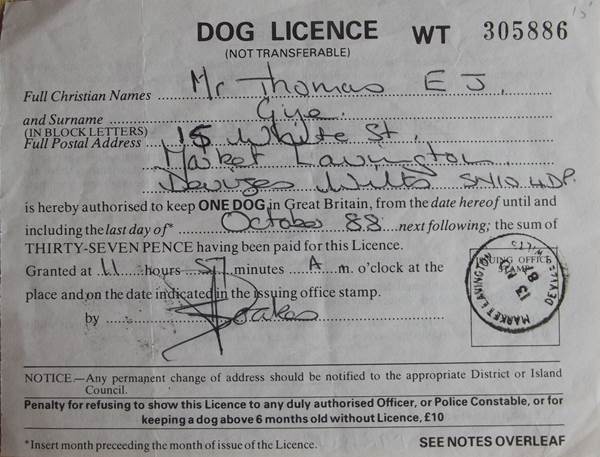 We can see that Tom had to get this licence in November 1987 and it was valid until the end of October 1988. Well it would have been had dog licences been needed into 1988.

The price of the licence had remained unchanged since before Britain had a decimal currency. It had been 7/6 in old money and that seemed a sensible and simple sum back then, being three half-crown coins. And that became precisely 37½p when the country adopted its decimal currency in 1971.

We are reminded, too, of previous owners and runners of the Post Office for the licence is signed by either Pat or John Noakes. There’s some ex residents we can all send good wishes to.

And what foresight of the Gyes to save this little item for posterity.