Until about 90 years ago most of the movement of goods on roads was powered by animals. A particular problem, which had to be solved, was going downhill. The picture shows the Market Lavington rag and bone man, Billy Davis, taking his donkey cart down a Northbrook Hill. 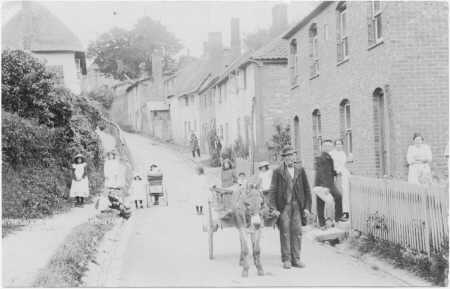 Billy Davis with his donkey cart on Northbrook - ca 1905

It looks as though the locals had spotted the photographer was out and the locals have gathered to have their ‘likeness’ in the photo as well.

But back to the cart and the drag shoe. If we imagine a heavily laden cart and a steeper hill, the cart would start to push the donkey. Speed would be gathered and a spill, perhaps serious for the donkey would have been inevitable. And the same could happen on a larger scale with big wagons pulled by shire horses.

The answer was the drag shoe.

A drag shoe (with ruler for scale) at Market Lavington Museum

At the top of a steep hill the driver could place the shoe under a wheel and then that wheel couldn’t turn. The friction between drag shoe and rough road surface would ensure a steady descent.

No doubt drag shoes were subject to a lot of wear and tear, but the example in Market Lavington Museum seems good for more service yet.