At Market Lavington Museum, we have a Bible, which dates back to at least the mid 18th century. In fact we believe it was probably printed in around 1715 so it is all but 300 years old. It is a large book for it also contains the Book of Common Prayer, an Index to The Bible and The Book of Psalms.

The bible has various hand written ‘extras’. At the start of the Book of Common Prayer is this inscription. 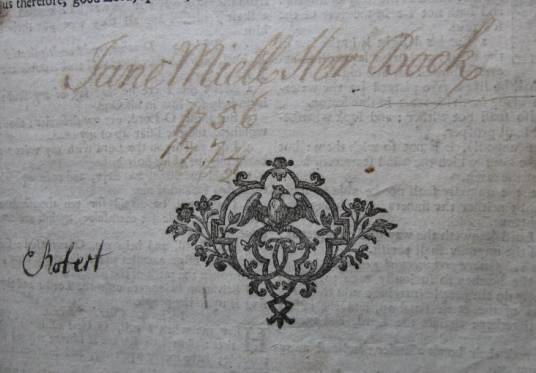 We think this says,

A Jane Miall (that surname appears with various spellings including Mihil) was baptised at St Mary’s Market Lavington in 1727. Perhaps this Jane was her, daughter of Abednigo and Elizabeth.. If so it looks as though she was born in 1724 and did a sum to work out how old she was in 1756,

There is also the single name Robert which looks to be in a different hand.

At the front of the book there are three pages of hand-written entries. It seems that by 1778 this bible became the family bible of Robert and Leah Merritt. Most of these entries list the births of children to the couple between 1778 and 1804 but an inoculation is also listed in 1799. 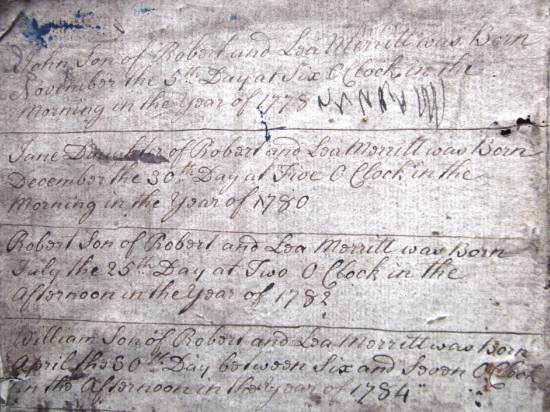 Most of the hand-written entries are about the children of Robert and Leah Merritt, of Market Lavington

Picking on one of the entries we can read that Robart, son of Robart and Lea Merritt was born July the 25th day at two o clock in the afternoon in the year of 1782. Baptism records tell us that Robert was baptised at St Mary’s, Market Lavington on August 18th of 1782.

Earlier this month we opened the museum for a descendant of Robert and Leah to study and record this bible and to touch the pages once handled by her ancestors. It was quite an emotional experience. This visitor had only just discovered she had a connection with Market Lavington but there are still descendants of Robert and Leah who live in the village.

We have not identified any link between Jane Miell and the Merritts but the bible obviously went from her to Robert and Leah.