By tradition, farm workers wear a red spotted handkerchief tied around their neck. This was definitely the case and, unsurprisingly, the neckerchief served a purpose. Much farm work is dusty and a neckerchief could stop dust and irritating pieces of hay and straw from getting inside the shirt (or in earlier days, the smock). We can guess that the red spotted nature of this garment was mere showmanship.

We have such a handkerchief at Market Lavington Museum. We originally thought it dated from the 1920s but others who know more than us think it is probably more recent. This handkerchief is made of cotton. 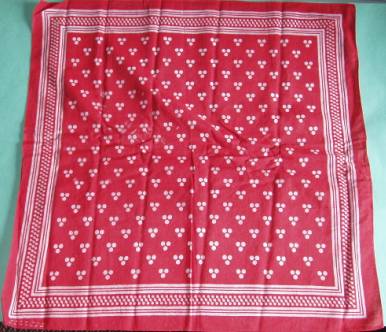 This was one of the items with which the museum started, back in 1985, and it came from the personal collection of our founder, Peggy Gye. It’s actual origin is not certain, for Peggy was not averse to buying items at jumble sales if she thought they had interest.

With the museum having opened in 1985, it means that this year we mark our Silver Jubilee and our last event to mark the year is ‘Museum Miscellany’ – a look at past ways of life in the parish, and the people who lived them. This takes place at 7.30pm on Saturday 18th September at Market Lavington Community Hall. Tickets are on sale at Market Lavington Post Office. Do come and enjoy the sights, sounds and tastes of the village.