How does a bell ringer celebrate his Golden Wedding? Well in the case of Tom Gye, one way was to have the bells of St Mary’s rung to mark the occasion. A group of six ringers rang a quarter peal of Grandsire Doubles. That’s 1260 changes and it takes around 40 minutes. The Gyes, Tom and Peggy had some cards printed to remember the event and we have one of them in the museum. 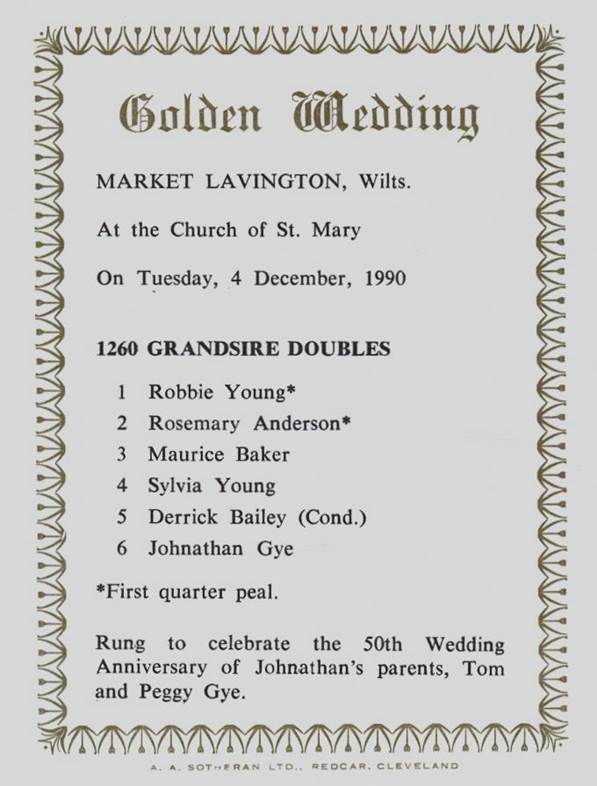 The card says it all. It gives the date of 4th December 1990 and tells us who rang which bell. Bell six, the tenor, was rung by Tom and Peggy’s son, Johnathan. He, like Maurice Baker is, sadly, no longer with us.

Of the other ringers, Sylvia Young is now the Tower Captain and Derick Bailey is seen most practice nights at the tower. Sylvia’s son, Robbie, lives away from Lavington now but sometimes rings when he visits his parents. Rosemary Anderson also lives well away but has rung when visiting the area.

So ringing goes on still in the village and our curator, who is also a ringer, says it is an enjoyable social activity offering a bit of physical exercise and also doing the brain good as you learn new methods.