There will be many people who dislike what get called country sports, but we live in a rural area and these sports have taken place and still do. The shooting of game birds has been something that people do for many years and, of course, this was not only sport. It provided food for the table. At a rural museum, like Market Lavington, we have memorabilia from these activities because it would be wrong for us to be pro or anti anything. We simply keep such record as we can of the way of life of local people.

So, amongst our displays is an early twentieth century hawk kite seen below. 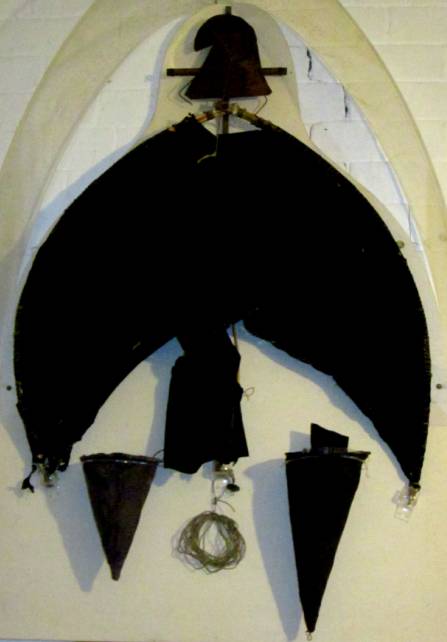 This was used when shooting partridges, particularly on open downland. Beaters – usually young men or farm workers supplementing their income – were employed to make sure the birds flew. Shooters do not deem it right to take a sitting bird. But partridges are very quick and gain altitude fast – soon getting out of range of shotguns. So, to keep them lower, a hawk kite was flown. The partridges, wary of this monster in the sky, kept lower, giving the guns a chance of success.

A local 90 plus year old recalls flying a similar kite when he was a lad. Apparently a near gale was blowing across the downs and it took two of them to keep hold of the kite. When the birds were flushed into the air, the strength of the wind took them so rapidly that they were almost instantly out of range and not one pheasant was bagged under the kite. Our nonagenarian became a regular country sportsman but this was the only time he ever saw a hawk kite in use, from which he deduces they were not as very successful idea.