We have a wonderful collection of Hopkins bill heads. Retailers got bill heads on the cheap by having a manufacturers advert on them – like this one below.

A Hopkins of Market Lavington bill of 1913

But it is the advert at the head of this bill that really appeals and recalls a bygone age.

These days the electric lamp is just about everywhere in the UK but back in 1913 most smaller places did not have mains electricity and locally produced gas could be used for lighting – particularly by the well to do folks. Most gas does not burn particularly brightly and so an incandescent mantle was used. When heated by the burning gas these mantles produced a wonderfully bright light. And the advert tells us that if we used the Veritas mantle we’d be quids in because we’d get our light burning less gas. 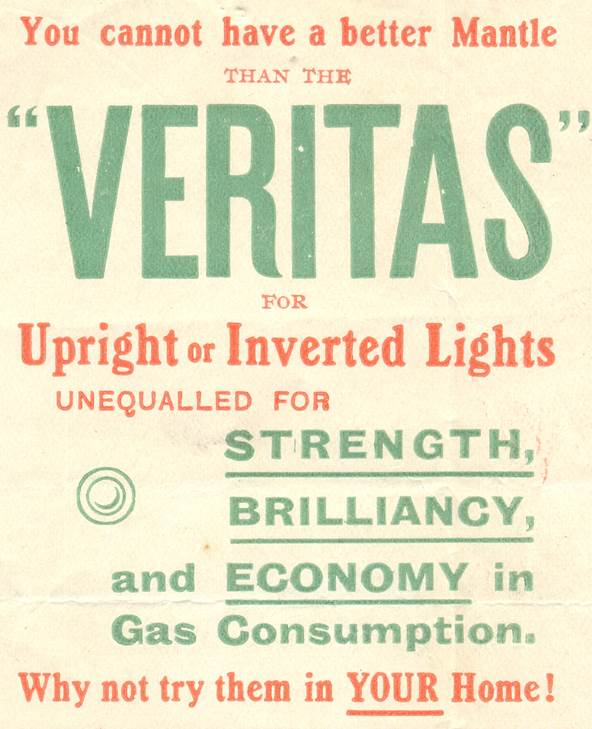 And these points are pressed home by a flag waving Boy Scout.

A problem with mantles was that once put into use they became very fragile. It didn’t take much of a knock to damage them beyond use so advertising as strongest was, no doubt, a good ploy. It rather looks as though our flag waving lad has broken the lamp cover but the mantle is still there and intact.

A lovely item here which says much about life 100 years ago. These days heating, cooking and lighting are all ‘at the flick of a switch’. It was so different back then.