A letter of thanks to James Welch

Welch is a long term family name in our parish. Market Lavington Museum’s founder was born as a Miss Welch although after close on 70 years of marriage she was much better known as Peggy Gye.

The letter we look at today was sent to her grandfather, James Welch, and follows the death of Queen Victoria in 1901.

Let’s start with the envelope, black lined as befitted this time of mourning. 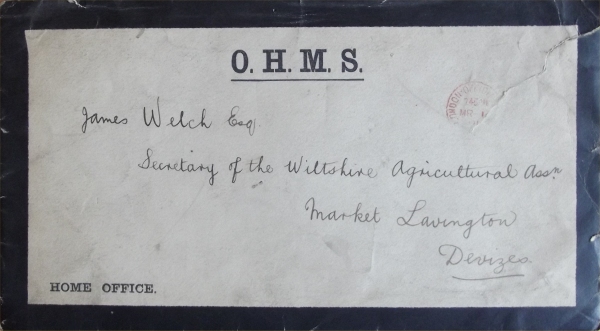 At the time this letter was sent, James was secretary of the Wiltshire Agricultural Association and he lived with his wife, Annie and a couple of children on Church Street in Market Lavington.  This could well have been Meadow Cottage which was a Welch owned house.

As a side issue, both James and Annie had James Lye Fuchsias named after them – Annie had been Annie Earle before marriage and that is the name used for ‘her’ fuchsia.

James Welch had not always lived in Market Lavington. In fact, he was born, about 1855, in South Wales where his father (also James) was assistant manager of an iron works.

We first find James, with wife, Annie and the two children in market Lavington in 1891, but the Welch family had a long connection with the parish.

The letter James was receiving was actually a form letter. The Agricultural Association had sent condolences to the family of Queen Victoria on her death and this was a semi-personal reply. The letter, like the envelope, is black edged as a mark of respect for the late queen.