A letter to the front

Market Lavington and Easterton were no different from the rest of the country during World War One. The young men were away at the front and worried parents and partners were back at home, sending letters to try to support their fighting folk.

One such letter has recently been given to Market Lavington Museum. It comes from Samuel Moore who lived along The Drove in Easterton and who was running his fruit preserving and jam business. The letter was sent to his son, Wilfrid.

The museum has ben given a photocopy of an original letter which Wilfrid carried with him until he left the army. The condition is amazingly good.

Sam Moore wrote the letter on company memorandum paper with this header. 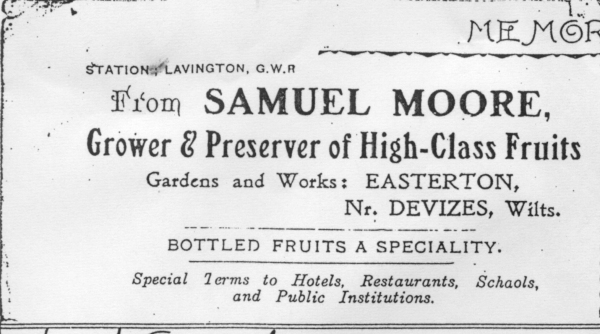 And this gives the time and date and destination of the letter.

The letter itself is largely Sam suggesting his son is in neglect of his duties at the jam factory whilst he is away fighting the enemy. It is a fascinating insight into ways of thinking.

First part of the letter

Since your absence, 2 years ago we have made ‘Herculean’ efforts to fill the gap you left when joining the army and we have also done much to defeat the enemies objects by putting on the market all the produce we possibly could. And I am pleased to say our products have given much satisfaction. We are already asked to increase our output tenfold but this cannot be done unless you return to your former duties. That is the superintending of the Bottling Department and the preservation of the fruit in our unique way for the production of the highest class jams. To speed matters up would it be advisable that you should make a direct appeal to your commanding officer?

This would be in accordance with the government plan for demobilisation. I am already asked what men and women I could employ but this entirely depends on your early return. It has been quite impossible to find people who are capable of carry out our plans and methods without almost wearing me out. And I am beginning to find the strain of this very much now. My memory is getting very bad indeed. I think it is a pity that something should have been done whilst you were on leave. I hope that you arrived in time and that you did not miss your train.

From your loving father