By 1901 Joseph was married, to Agnes and they had a baby called Annie. They lived in Devizes and Joseph’s job was a coachman.

Like us, the Canadians had a 1911 census. This tells us that Joseph, Agnes and the two older children actually arrived in Canada in 1909 and that Joseph was a farmer who also earned money doing odd jobs. As it would look as though he worked about 60 hours a week on the odd jobs, maybe the farm was either very small or not successful. The address on the census looks to be Robin’s Range.

The family stayed in Canada and sent information about life back to relatives in Market Lavington amongst whom was Joseph’s niece born May Potter who became Mrs Elisha. One photo sent to Mrs Elisha shows the family enjoying a Christmas Day sleigh ride. 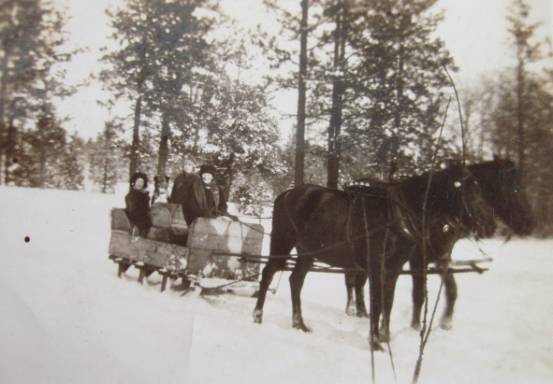 The Potter family of Robin's Range, British Columbia on a Christmas day sleigh ride - a photo at Market Lavington Museum. Joseph Potter was born and raised in Market Lavington

Joseph probably took the photo, which shows women – presumably Agnes, two girls who look to be between 15 and 30 and also the dog.

The back of the photo has a caption.

Caption on the back of the photo.

It would be tempting to say we are looking at a totally different kind of Christmas here, but with the weather in 2010, we could almpst imagine seeing this kind of scene in Market Lavington.

Any further information about Joseph Potter and family would be greatly appreciated.

And from us, can we say a Happy Christmas to all our browsers.