A Market Lavington Wedding in 1900

A few days ago we looked at Wilsons at the Vicarage and in particular the life of Violet Wilson who spent virtually her entire childhood under the guardianship of her uncle and aunt, The Reverend Edward Blackston Cokaybe Frith and his wife, Maria. They lived at the Vicarage in Market Lavington which is now incorporated into the nursing home.

Since writing that a picture has arrived for us, at the museum, showing some of the wedding party when Violet married Harry Jones. 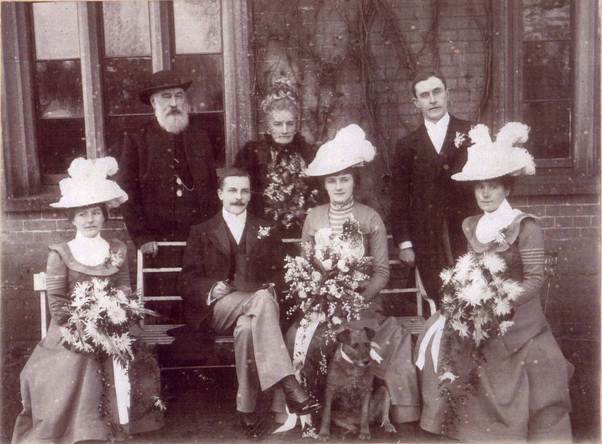 Wedding party at the marriage of Violet Wilson and Harold Jones in 1900. The photo was taken at The Vicarage, Market Lavington.

This picture was taken at Market Lavington Vicarage. The happy couple sit in the middle on a garden bench which appears in other photos we have of the building.

The man at top left is the Reverend Frith, vicar of Market Lavington and Uncle of the bride. We guess that the lady standing behind the couple is Maria Frith, the bride’s aunt. They were the blood relatives. The bride’s mother, who died giving birth to her, was Maria’s sister.

We can guess that the two bridesmaids are the sisters of the bride, Renee and Fanny Wilson who were also brought up by their aunt and uncle. We have no name for the other man.

Of course, if anybody can add anything, we’d be delighted to hear from them.