A Motoring and Hiking Map

Another new map? Well actually, it is quite an old map and a very battered and worn map it is too. But it has period charm.

A Motoring and Hiking Map at Market Lavington Museum

It is a Motoring and Hiking Map and the illustration on the front shows a pair of hikers, studying their map whilst a period car trundles past on the road.

This map was printed by a well known firm of cartographic printers – W. and A. K. Johnston Ltd. Of Edinburgh and London.

There is no indication as to year of publication. From the cover illustration we believe it dates from about 1930. Several maps from this series can be found offered for sale on Internet auction sites. Most sellers suggest either 1920s or 30s.

The map owes its origins to, and gives credit to the Ordnance Survey.

As a map for hikers it must have been almost useless. The scale is three miles to the inch and at that scale very little in the way of detail can be shown. The size of the map is about 60 cm by 50 cm so it covers about 70 miles from north to south by 60 miles from east to west. That’s a huge area for hiking.

A series of these maps covered the whole country. This is map J. The area it covered can be seen described on the illustration. But that does not mention Market Lavington or Easterton, which do appear on the map. The section shown is about 7 cm across on the actual map. 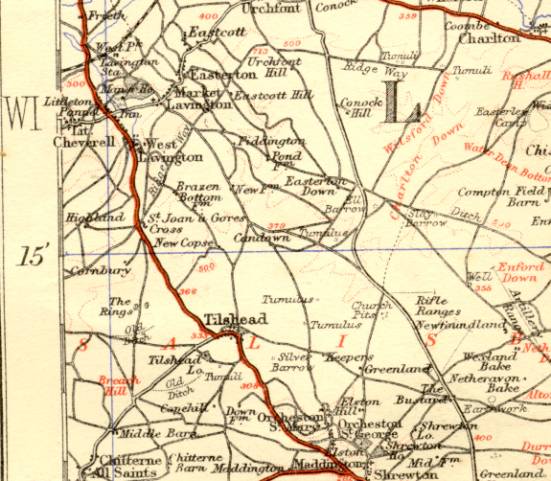 The area of the map which includes Market Lavington, Fiddington, Easterton and Gore

Up on Salisbury Plain, above Easterton, Pond Farm is shown. That probably means the map survey predates the First World War, for the farm was in an area taken over for artillery training and used as target practice. Similarly, New Farm is shown above Market Lavington. The farm at that outpost of the parish, Candown, is not shown but the area is named as Candown and looks to be a major road junction. In truth there was a selection of vague track ways, ready to ensure the unwary traveller got utterly lost.

This is a delightful addition to our range of old maps at the museum.