A Much Travelled Leaf

We have featured items which belonged to the Baker family before. John Baker was a tin smith and trader, living and working in the property opposite the Co-op and next to Woodland Yard. He and his wife raised a family there in Victorian times and this  leaf shaped dish was a part of their life in those late Victorian days. 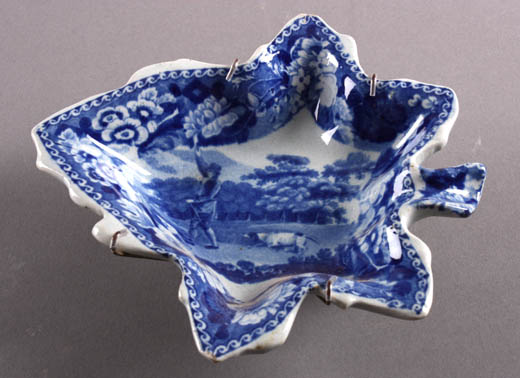 This dish has travelled by land, sea and air from Market Lavington to Canada and back.

There is little to say about the dish. It is clearly leaf shaped and decorated in the blue and white style. The picture depicts a man with his dog. How the Baker family used it, we don’t know. Neither do we know anything regarding the manufacturer or the actual age of the dish. It’s a small dish – about 15 centimetres long.

But it was clearly valued. After John Baker died in 1903, some members of the family decided to emigrate to Canada and the dish went with them – in 1907.

Canada was where the dish stayed for the next 87 years. It was given to the museum in 1994 by a family member on a return visit to the old homeland.

As an interesting thought, when the Baker family emigrated, this dish would have travelled by train and ocean liner. On its return it travelled by aircraft and road transport. So the leaf is well travelled by variety as well as by distance.

By the way, our curator hates the springs and clips that have been used to mount this dish. This method of fastening can cause chipping to the vulnerable edge of china ware.  But it has been like it since 1994 and it may have been like it before – back in Canada. Any new donations of items like this will not be treated in this way, however.