A fairly standard Wiltshire wall building technique has been to use cob. Cob had, as one of its major ingredients, clay. There’s a habit of calling soils and subsoils mud, so a cob wall might be called a mud wall.

Mud walls need waterproof boots and a waterproof hat. The boots take the form of hefty stones which can raise the mud above the wet ground level. The waterproof hat, traditionally, was thatch although tiles could be used.

Cob was common for the walls of buildings, but if we talk about a mud wall, we mean a boundary wall, rather than a wall as part of a bigger structure.

One of the last survivors of a mud wall in Market Lavington was at The White House on White Street. This photo of it was taken in about 1958. 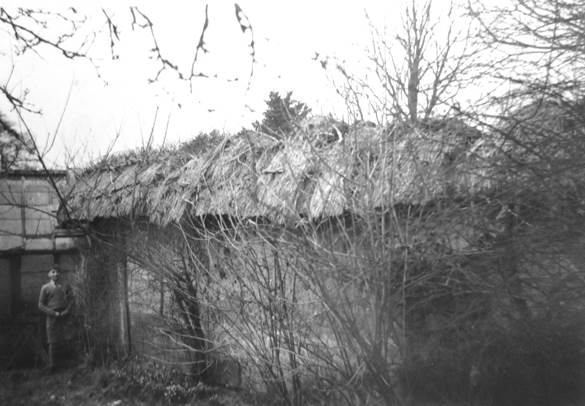 The wall is clearly getting to be on its last legs. The waterproof hat definitely looks in need of attention and without a good thatch, water will soon spoil the cob.

The young lad is Johnathan Gye and he provides some scale. It is quite a substantial wall.

Perhaps the best known mud wall in Market Lavington ended up getting its name corrupted. The little street known as The Muddle had a mud wall alongside it and Muddle is a corruption of mud wall.