Market Lavington Museum has several baskets made by the Mullings family. There were four generations of Mullings making baskets in the area, starting with  George who was working in Easterton in 1851.

Next came his nephew, William, who set up his basket making business on High Street in Market Lavington, more or less opposite The Green Dragon

William’s son, also William, moved to The Clays in Market Lavington and carried on the business.

His son, Sid, continued the business, finally accepting that baskets weren’t in much demand in the middle of the twentieth century.

We believe that Sidney made the basket we feature today. 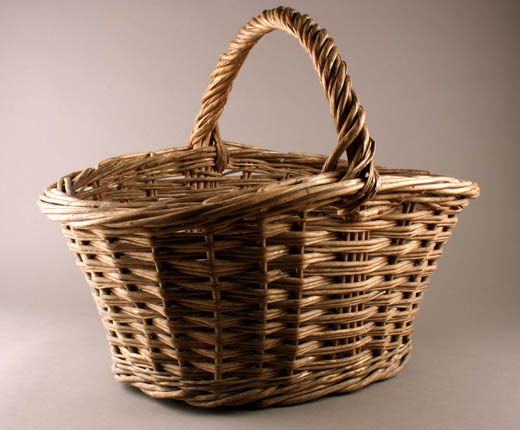 This basket is said to date from the mid 20th century and it was given to Peggy Gye. Maybe Sid was aware that his business was ending and he knew that Peggy had taken on the mantle of ‘village historian’ and thought she might preserve one of his baskets. Well, that has happened, but not before the basket was used by Sid Cooper on his market garden at The Sands, Market Lavington.