Back in May 2015 we looked at an Austin 7 car which had belonged to Betty Gye of Homestead Farm. When Betty was ready to take her driving test, her dad decided she couldn’t take it in the old Austin which, with poor brakes wasn’t really roadworthy. A new car was bought – a Ford Popular and here it is. 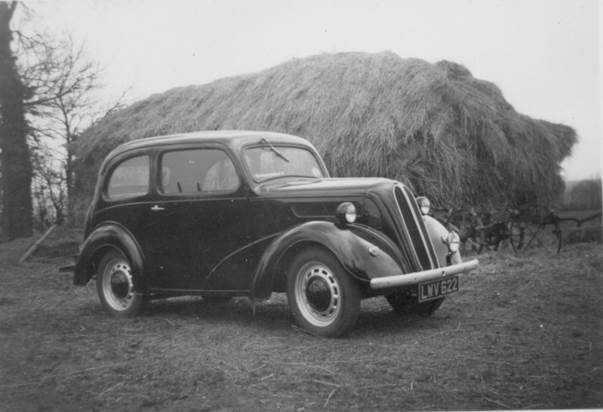 Betty Gye’s Ford Popular in about 1954

The design was still very much pre-war. We are no experts but we believe this was little more than a revamped Ford Anglia of the 1930s. It was built on the cheap – you might note only the driver has a windscreen wiper – and they were, as a result, very popular. This car would have had semaphore indicators which emerged from the bodywork just behind the door but this one also has an extra – a fog lamp has been added.

Betty was proud of it and a photo was taken.

But look at the background. Behind the car is a lovely loose hay stack which looks to be a bit crudely thatched to keep the rain out. That would have been a real labour to build that stack by hand.

The item between car and stack may be some kind of hay tedder – something that puffed up the hay to get air to it to speed drying.

The old car – it would now be over 60 – is a real reminder of times past but so too is the chance agriculture captured in this shot.