Newspapers always tend to go in for things being a bit sensational. This feature comes from a Wiltshire paper, The Times and Echo for Thursday February 11th 1965. 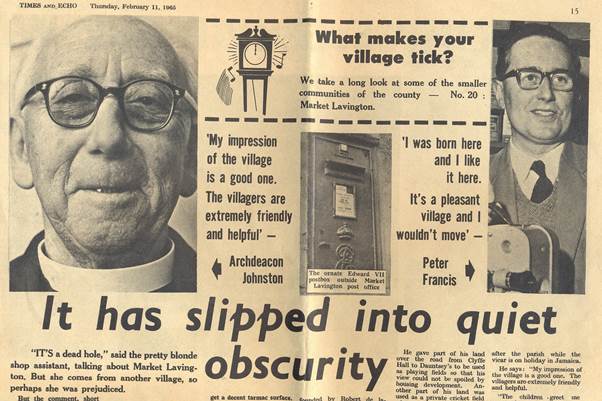 Newspaper feature about Market Lavington in 1965

Had Market Lavington really slipped into quiet obscurity in 1965? Two locals are quoted at the top to give a bit of balance in what is quite a negative article. Archdeacon Johnston was a retired churchman who had recently come to the village. Peter Francis was and remained a lifelong villager, best known as our professional photographer in post war years.

But the headline and comments such as, ‘But the village is an old man. Some would say that rigor mortis has set in’. Leave little room for doubt. The unnamed author of the piece didn’t think much of our village.

He goes on to tell us that,

‘There is nothing for Market Lavington to look forward to.  A few more council houses, perhaps. And one day the High Street may get a decent tarmac surface.’

It would be interesting to know what became of the person mentioned in the opening paragraph and what her views are now.  She’ll be certainly in her 60s by now.

The opinion of a teenager

Her comment was considered to be typical of what teenagers in the village thought.

Now we are probably even more biased than the author of that piece, but we reckon that nearly fifty years on we live in a lovely village with a vibrant community spirit. I don’t think anyone would pretend that Market Lavington is the prettiest place in the world, but we do have varied and attractive buildings and plenty of open space. We still have good shops, a couple of pubs, two different church communities, primary and secondary schools, a library, a purpose built doctor’s surgery, playgrounds for children and, of course, our fantastic Community Hall. This is so busy it can be hard to book a date for an event. Did I forget anything? Oh yes, we have a very active museum, much loved by local people.

But we’ll return to that page in the paper, and in particular, the adverts. Two local firms were brave enough to put there adverts on this page.

One was the Green Dragon Hotel. 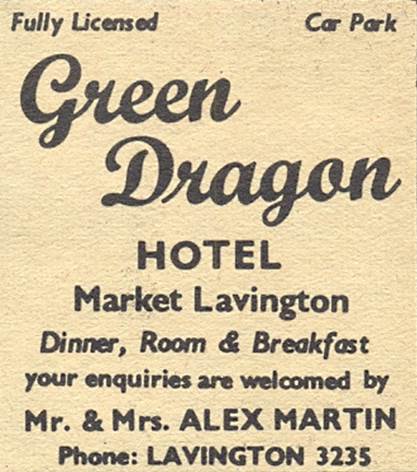 Clearly Mr and Mrs Alex Martin were pushing its hotel status by offering, at unseen prices, dinner, room and breakfast along with the presence of a car park. 1965 was before the introduction of legal blood alcohol limits for drivers although it was an offence to be in charge of a mechanical vehicle whilst not capable due to alcohol or other drugs. The judgement was subjective.

And maybe a reader remembers the Martins. If so, do tell us more.

The other advert was for the hardware shop, just about opposite the Co-op.

At this time, then, J R Cox had the shop. That name does not seem to register in the memory of people asked so far. Maybe, again, a reader can tell us more.

And if you want to read that whole 1965 article, then visit the museum.