Many items, amongst the 7000 or so we have at Market Lavington Museum, are kept out of sight in the storeroom. We sometimes refer to them as the hidden treasures of Market Lavington and Easterton.

Amongst them is this item, which was made in about 1890. It is a large, double sided cotton bedspread, hand knitted by Hannah Crassweller. What a labour of love that must have been. 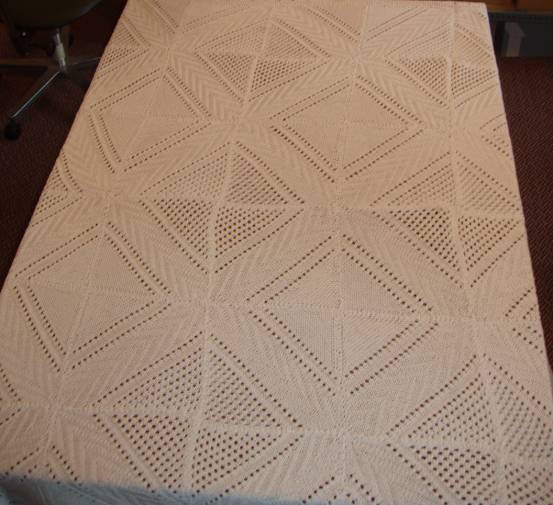 Hannah Crassweller (nee Potter) hand knitted this cotton bedspread in about 1890. It is at Market Lavington Museum

The bedspread is shown on the museum research desk. Sadly, we do not have the space to have it on display on a regular basis. Our research desk is nothing like the size of a double bed, so we can only see a section of this item here.

Hannah had been born in the 1860s as a Miss Potter. One of her early homes was at a pub called The Angel, which later became the Volunteer arms. The building, on the corner of Church Street and Parsonage Lane, is now purely residential.

Mr Crassweller came from Sussex. He married Hannah in 1886 in London. The couple returned to Market Lavington before the First World War and both lived until they were over 90. They are buried in the churchyard here in Market Lavington.

Hannah passed on some of her long memories to others so we still have some of her nineteenth century knowledge in the museum.

Genealogy searchers might be looking for variants of the Crassweller name. At the museum we have it recorded as Crasweller, Cresweller and also Cressweller.