The street known as Northbrook leads out of The Market Place. It goes down a hill and at the bottom it crosses the stream, also called Northbrook. It then rises up, quite steeply on to the sands. The present tarmacked road ends at this point but footpaths continue – there’s a choice of five paths radiating out from the top of Northbrook.

There are potential views over the village from points up Northbrook. Photographer Alf Burgess found a spot in about 1910 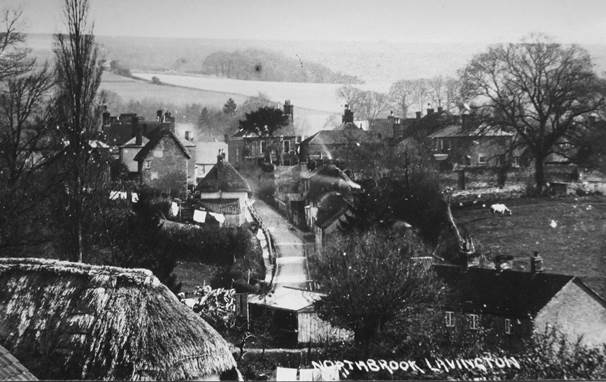 Northbrook, Market Lavington from the sands in about 1910

It is quite hard to get this photo to match anything from the present day. So much has changed. But the terrace of cottages at bottom right is still there with the Northbrook stream running past this end gable.

The thatched roof is probably that of ‘The Rest’ also still in existence. The little corner of tiled roof at the bottom left of the photo would be on cottages demolished in about 1950.

On the right hand side of the picture there are cows grazing where now you’d find the houses on Bouverie Drive.

In the middle of the picture we can see Northbrook (the road) making its way up to The Market Place where all has changed. 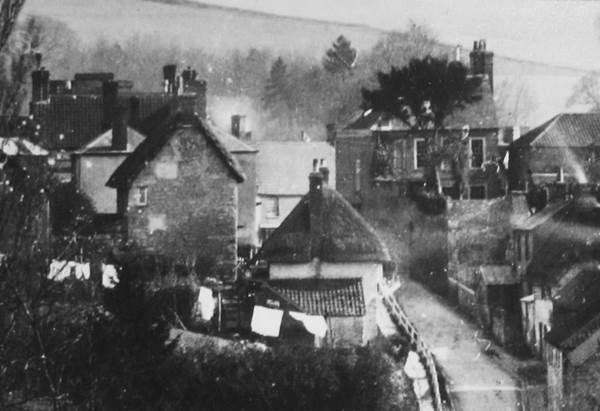 The cottages lining Northbrook on the right of this enlargement have either gone or been altered. The thatched cottage in the centre alongside the raised footpath is still there, but not thatched.

To the left of that cottage, and almost behind it we have another cottage now demolished. The white building beyond must be part of a house we sought – Ivydene. This was the home, later, of Fred Sayer, the bus company proprietor.

He also became the owner of the large house behind the tree. The other side of that house faces the Market Place. That house had belonged to Doctor Lush at one time. It was demolished in the mid-1920s to allow more space for Fred Sayer’s fleet of buses.