A pair of maps

The United Kingdom is really lucky with maps. Some might disagree with the view that our Ordnance Survey maps are the best in the world but even those who do think differently could not but admit that good old OS maps are brilliant. The first surveys were made early in the 19th century and these have regularly been updated since then. Until the space age, the updates were by careful surveys across the land. These days, with satellite photographs updates are much easier and quicker.

We have many maps of the area of our parish at Market Lavington Museum, but we have just acquired a couple more. These show the lie of the land in 1926 and are at the large scale of 6 inches on the map representing a mile on the ground. The maps cover an area of three miles by two miles. Both maps show parts of the parish, past or present, which are on Salisbury Plain.

Large scale map showng the area around the tithing of Gore. The map, which dates from 1926 is now at Market Lavington Museum

This one shows a part of the tithing of Gore, which is in West Lavington now, but was once a part of Market Lavington, although separate from the main part of the parish. The main road (now the A360) from West Lavington towards Tilshead runs across the map past Joan a Gore Farm. Of particular interest on this map is the area around that farm. 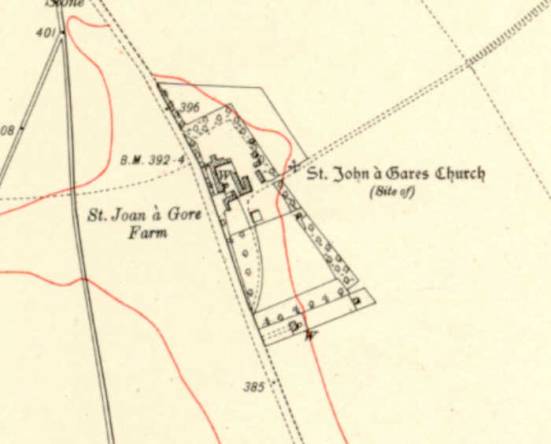 This shows the site of the old church, which was once a second chapel within Market Lavington. We can see the same area on a modern photo. Remnants of the old chapel of St John a Gares still remain. 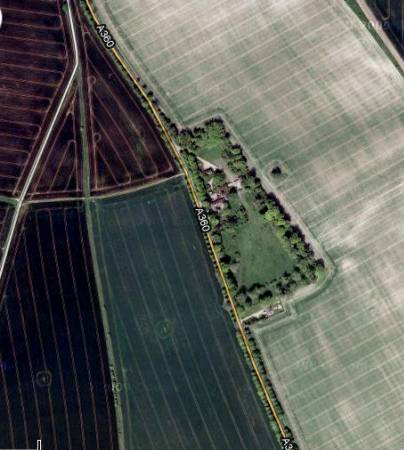 Our second new map (from 1926) shows the downs above Market Lavington and Easterton. 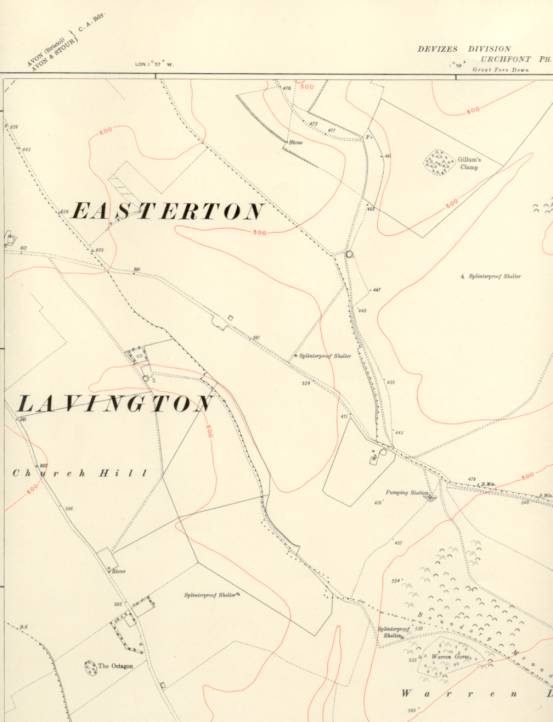 The interest of this map is more for the absence of things rather than for what is there. For up until at least 1911 there were people living in this area, but homes and farms were removed by target practice when the area became the military training area. 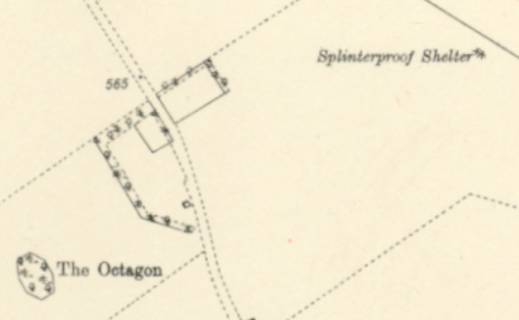 This section of the map shows the continuation of Market Lavington’s White Street as it passes over the downs. Before the military ranges, Philpott’s Farm was sited where the tree-lined field boundaries are shown. There’s no sign of buildings.

The modern aerial photo shows the same area and is very recognisably the same place.

The same area in a modern photo

With over 80 years between map and photo, the trees have spread into the areas where once the farm and buildings were protected from the wild winds.

The Octagon still exists (and is still called that on modern maps. The splinter proof shelter marked on the old map is still visible in the new photo. That, of course, is a military installation.

The full map – 3 miles by 2 miles shows the sites of other farms including Pond Farm, Easterton Hill farm and Fiddington Farm. It reaches very close to Candown Farm as well.

We are delighted to have these maps, which add to the picture we have of the downland parts of our parish.