Amongst recent gifts to the museum we have photos from an Easterton Palm Sunday parade in 1988.

Yes, we know that 1988 will sound like yesterday to many of our readers, but it was nearly thirty years ago which probably means about a third the population of the world wasn’t alive then. 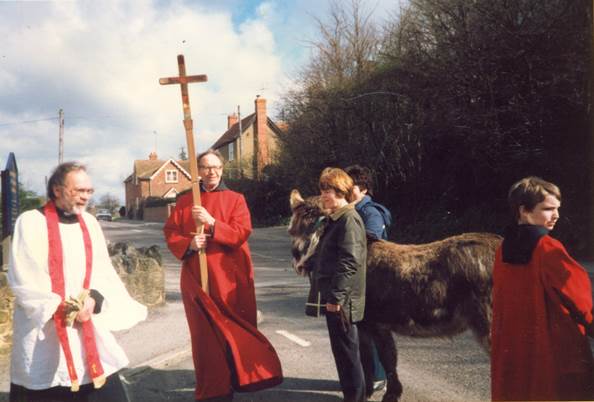 Here we see a group getting ready. The Vicar, Ralph Wilkins is on the left and the crucifer (the man with the cross) is David Duffield. Liz Ferris is holding the donkey. We do not know the name of said donkey nor can we make out the person in blue behind it. Looking out of the photo on the right side is Peter Duffield.

The Duffields moved away from Easterton close on 20 years ago and we are on our third local vicar (now classed as a rector) since Ralph and his family moved on to pastures new.

This group are beginning to form up outside the church lych gate at St Barnabas Church in Easterton. The view looks along the road towards Eastcott and Urchfont.