A part of Mr Walton’s empire?

Arthur Walton came from Reading. His wife, Emily (née) Archer came from Brill in Buckinghamshire. They married in 1890 and by the time of the 1891 census they lived at Lavington House, White Street, Market Lavington. The Waltons had taken the shop so presumably they lived on site. They were still over the shop in 1901 but by 1911 they had moved their home to Ivy Lodge on High Street.

Mr and Mrs Walton extended their empire quite widely. The range of premises in Market Lavington became a department store with an overhead cash railway system – little wooden capsules propelled along wires to a central cashier. Waltons had the shop at Easterton at one time. The ghost sign on the shop showed his name when photographed in 1974. Forty years on his name has washed away and Draper shows through from before Mr Walton’s time.

But was this another branch of Mr Walton’s empire? 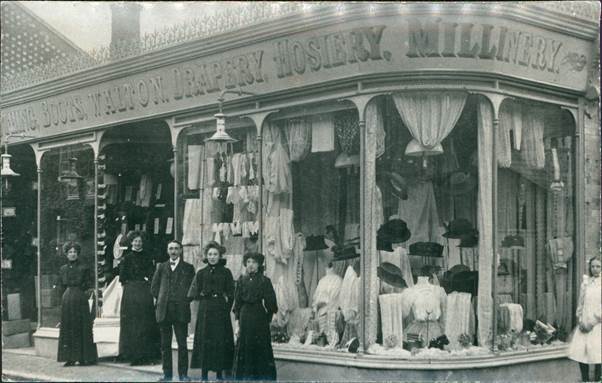 Definitely Mr Walton’s shop – but where?

Could it be in Pewsey where we think Arthur Walton had a branch.

We have, in the past, featured an image we have in the museum which was said to be in Pewsey (click here). We argued that the photo shown then was Market Lavington. Could a clerical error have occurred? Is this the Pewsey photo?

Do get in touch if you can help us.