Paxtons is an interesting Edwardian built house on the edge of the former jam factory site. It was built in the earliest years of the twentieth century so perhaps this photo show a celebratory get together soon after it was completed. 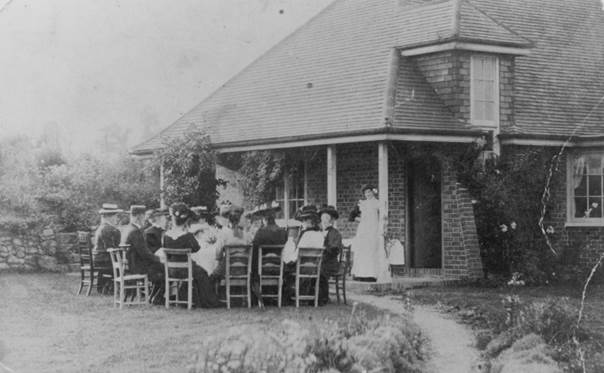 An Edwardian party at Paxtons in Easterton

We see a party of smartly clad ladies and gentlemen sitting around a table just outside the house.

Close up on the people

There appears to be a table laden with goodies. The ladies – we have not identified them – are nearly all wearing large hats. For men the straw boater seems to be required head covering. Those large hats and boaters are very much of the Edwardian era so we certainly date the photo to those early 20th century years.

It looks as though a maid is standing by, ready to jump to it as and when needed – a part of the scene but apart from the grander ladies and gents.

For the record, the occupants of Paxtons at the time of the 1911 census were Eleanor Tindall a 65 year old spinster born in London who was living on her own means and her 18 year old general servant Helen Maria Alexander who had been born in Market Lavington. Helen (sometimes Ellen) was the daughter of Richard, landlord at the Kings Arms