This is yet another advert from Harry Hobbs’ High Street shop. This one was designed to be used with its product – a giant sized box of Persil. 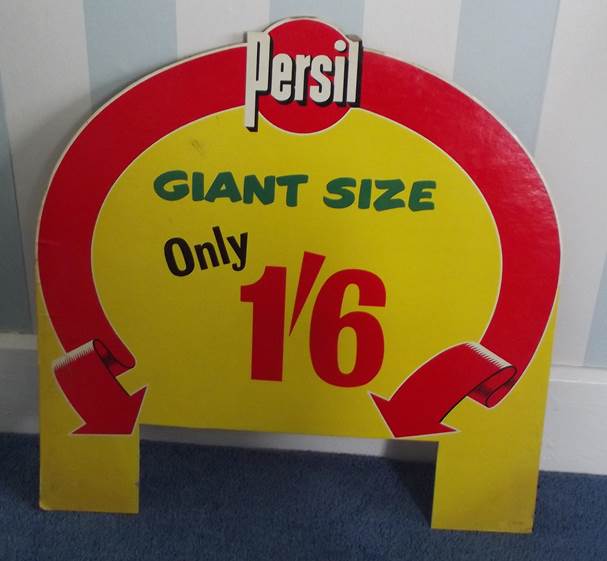 Persil is a laundry detergent and when it was introduced, in 1907, it was the first such product to combine bleach with the detergent chemicals. It reached the UK in 1909. The name Persil actually is derived from the two compounds of sodium which went inter it which were sodium perborate and sodium silicate. It was, and still is, a widely used washing product but of course, the style and constituents have changed.

So has the price since Harry Hobbs’ advert was on display. This may have been in the late 1950s. The cheapest we could find a present day Persil family pack – to do 35 wash loads, was £6. That £6 would have bought 192 of Harry Hobbs’ giant size packs.

We believe it is relatively more expensive now as well. Perhaps it is as much as four times more expensive. But maybe the product from more than half a century ago had less to contend with than today’s washing product.

It’s a wonderful item – like all the ads from Harry’s shop.