Older visitors to the museum love to look at items and say, ‘I used to have one of them’.  Today we are looking at an item that will fall into that kind of category. I’m afraid those older  visitors will have to make do with this ‘virtual museum’ for a few months, for, as from today, we close for the winter season. We plan an opening just after Christmas – you’d better check this blog for details – and then the new season begins at the start of May in 2013.

By then new displays will be in place to replace the royal themed displays of this Jubilee year. One planned display will be about ‘schooldays’.

But back to today’s object which is a potato ricer. Now we don’t really know much about these kitchen items, but would you believe, there is a site at http://www.potatoricer.org.uk/ which will tell you about them (and, no doubt, suggest where to buy one).

Ours, of course, is not for sale. It dates from the 1930s and was used at Clyffe Hall in Market Lavington. We imagine it was quite a sturdy device in its day, for Clyffe Hall was a hotel and they probably needed gear just a bit above domestic quality. Sadly, we have no maker’s name on this device. 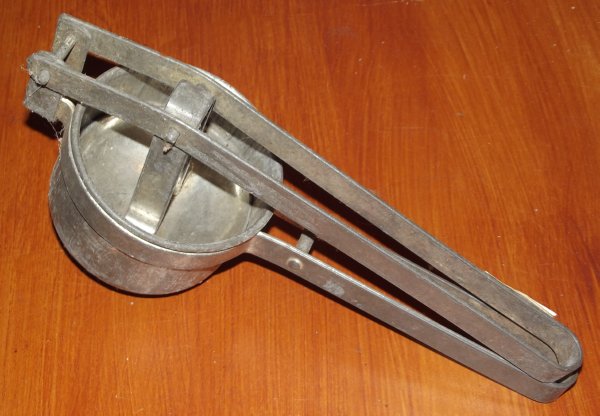 And here’s the underside. 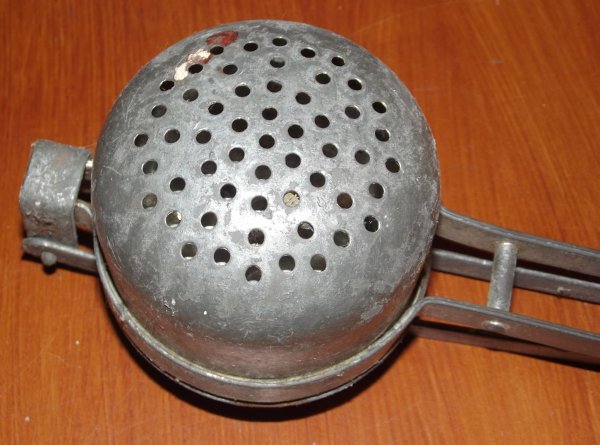 The underside. Strings of mashed potato issued from the perforations,

The idea was that vegetables (it didn’t have to be potato) were put in the perforated bowl. The handle was pulled down and the veg came out in strings which might be about the thickness of a grain of rice. That’s why they were and are called ricers.  These devices are said to make perfect mashed potato.

The ricer is just one of many kitchen items from the past which visitors can see in our kitchen room at the museum.