There was some wariness at first.

‘How much to come in?’ asked a teacher. On being told entry was free they streamed in.

The children and their minders were an absolute delight. They took an interest in everything with something of a gender division for the girls took particular delight in the clothes whilst the boys were keener on the artefacts in the military cabinet. Their cameras flashed away as the contents of the museum were captured digitally to take home to show parents. The children were wonderfully polite and keen to try out their English when they could.

Much of their conversation was as you might expect from children from anywhere in the world, with calls of ‘Oh wow’ and beckoning to friends to come and see things

In a museum totally devoted to the parish of Market Lavington, it came as a surprise to the people on duty that they found something about Russia. In 1943 Mrs Churchill organised a Red Cross Appeal to support Russian soldiers and Market Lavington held several events to support this – whist drives, dances and the like – and sent over £50 to help support our Russian Comrades. The records of these events are stored in the museum. 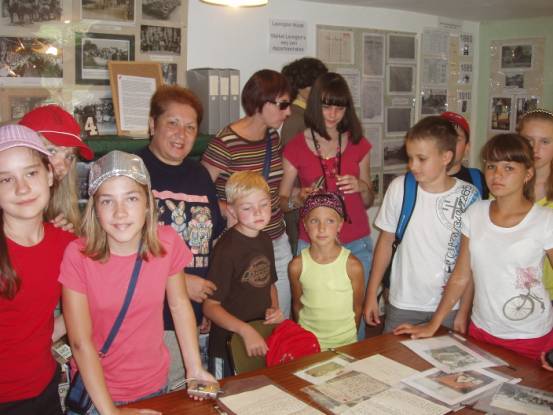 The picture shows some of the Russian youngsters being told about the brave Russian soldiers (they were really up against it in 1943) and how the villagers here had raised money to aid them.