Wills can be very useful to genealogists. They invariably give some information about family, place of dwelling and possibly occupation. This will, actually, is lacking in some detail, for Charles Scratchley, who made the will, didn’t name his children. 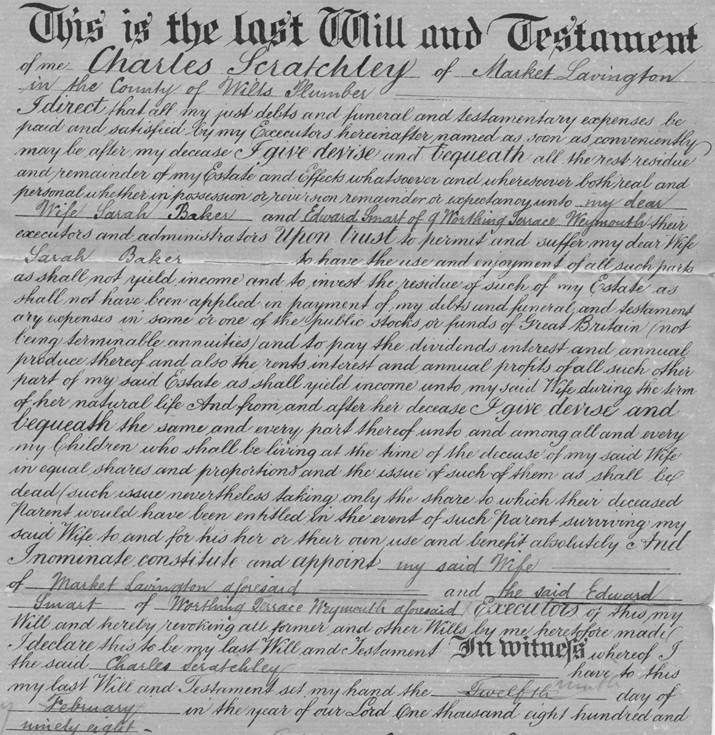 Last will and testament of Charles Scratchley of Market Lavington

The will was written in 1898. It names Charles Scratchley as a plumber and his wife as Sarah Baker (Scratchley). He lived in Market Lavington and obviously had children.

The will may have been pre-printed with just odd words added. It has, of course, been signed.

Signed by Charles and witnesses

The witnesses can remind us that there were others involved. Here we have Charles Edward Redstone of Easterton Wills and John Pinchen of Market Lavington, bricklayer.

Charles Scratchley was born locally and was a plumber and, often associated with that trade, a painter. The couple actually had four children and three survived at the time of the 1911 census which was the year in which Charles died.

For thirty years Charles and his wife Sarah had lived in the Workman’s Hall where Sarah was the caretaker.

A little more information can be obtained from the on-line probate record.

Charles was buried in the churchyard at Market Lavington.