A Single to Paddington﻿

Lavington Station was in the parish of West Lavington but it served the whole area. No doubt people from all the Lavingtons, Easterton and the Cheverells made use of the station which opened for business in 1900.

Tickets issued at Lavington Station were of the Edmonson type, those delightful rectangles of thick card. Each pre-printed card had a serial number which meant the ticket office clerk had no difficulty keeping a record of what he had sold. When sold, the ticket should have been date stamped so that any inspector could be sure it was a valid ticket.

We have just been given an Edmonson ticket – a Lavington to Paddington single. 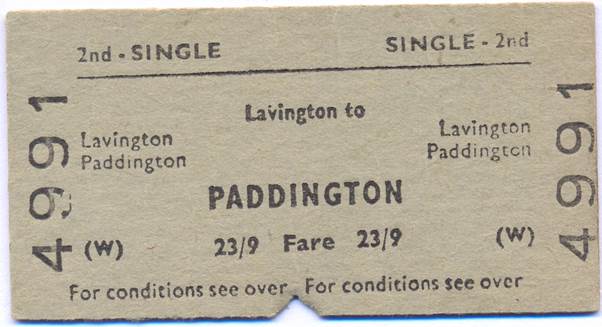 A Lavington to Paddington single rail ticket from about 1965

This ticket was issued by British railways Board and was valid for three days. As it has no date stamp we do not know when those three days were.

The fare of 23/9 is in pre decimal money which is no surprise since the station at Lavington closed before we changed our money system. However, we can be more accurate with the date of this ticket.

Until 1964 fares were charged on a strict mileage basis – at 3d per mile. Given that it is 87 miles from Paddington to Lavington, that would give a fare of 21/9. In 1964, many fares stayed based on the old three pence a mile rate, but rural fares were sometimes increased. So it would seem this ticket dates from between 1964 and the closure of Lavington Station on 28th April 1966.

These days the fare (from Pewsey) might be anything between £17 and more than £50 – plus getting to Pewsey and paying to park, of course.

If you have memories of the train service at Lavington why not tell us about it.