Some of the tools used in times past strike us, these days, as just a tad dangerous for the user. Such a tool was the spoke shave. These were sometimes known as a draw knife. We have such a tool at Market Lavington Museum.

This spokeshave, dating from about 1850, can be found at Market Lavington Museum

This one dates from about 1850 but still feels to have a sharp cutting edge. It was given to the museum by Bert Shore. He and his wife spent much of their married life living in The Market Place in Market Lavington. His wife was Flo Burbidge, born and raised in our museum building.

But back to that spoke shave.

The user sat astride a small clamp device and pulled the knife towards him. It seems to us that a small slip with such a sharp device could prove very awkward. We have used a picture from http://oculuswindow.blogspot.co.uk/2012/04/stumbling-towards-windmills.html to show how the device can be used. 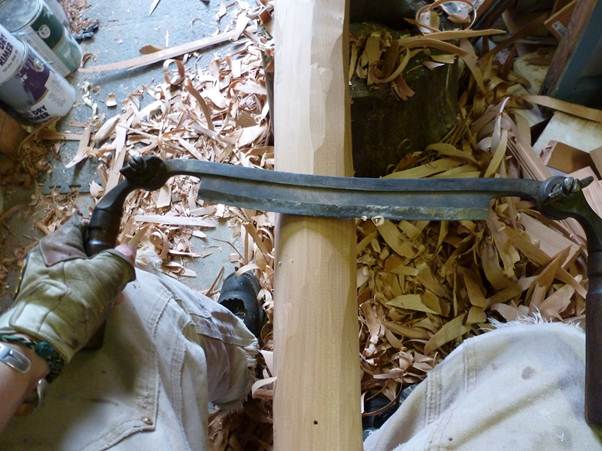 This chap was actually making props for a play. The spoke shave or draw knife was used to shape all sorts of smooth, rounded items.

Of course, spoke shaves are still in use today, but they tend to have blades which are protected and could only cause shallow cuts if things go wrong.