A tank on Church Street

Amongst some photos recently sent to the curator was this slightly blurred image of a military tank travelling along Church Street. 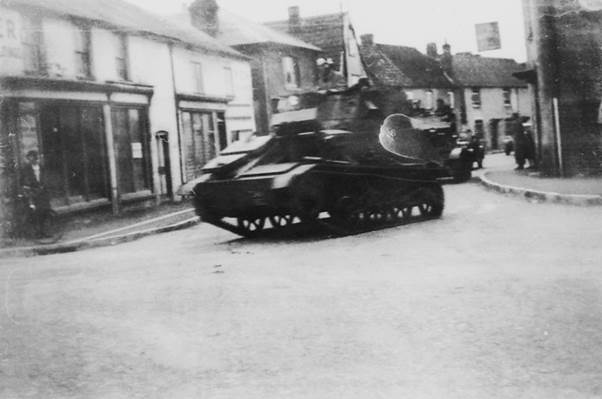 The sender of this image wasn’t sure when it was taken and suggested that the tracked vehicle was a Bren gun carrier.

Our curator sent a copy of the photo to the tank museum in Bovington who responded with the following.

The tank in question is a Vickers Light Tank probably a Mark VI – it’s difficult with the quality of the image to be specific on the exact mark of Light Tank though. The Light Tank Mark VI entered service in 1936 so mid-late 1930s would be the right time frame.

The tank is just rounding the corner onto White Street. The shop window on the left is now that of Saint Arbuck’s, the locally run coffee shop.

It looks as though it was, or had recently been, a part of Mr Walton’s empire when the photo was taken.

It looks as though the house on the corner of Church Street and Parsonage Lane (on the right) had already been demolished. The first building we see, with its rectangular sign looking to be suspended in mid-air in this photo, is the old Volunteer Arms.

It’s a delightful snap of how life was in the village and reminds us of the military presence – not just during war-time.