A Trophy from Mr and Mrs Elisha

Mrs Elisha was definitely one of the village characters and we have several pieces of memorabilia which relate to her at Market Lavington Museum.

Mrs Elisha was born as Helena May Potter in 1903. At that time her grandfather was still running his horse bus service between Market Lavington and Devizes. 1903 was a very different world from the one we know today.

May, as she was known, was active in village life and work from an early age. We know she did Red Cross work during the First World War and she was also a Sunday School teacher. Her Sunday School students gave her a rather nice mantel clock on the occasion of her marriage to Bill Elisha on 27th July 1929.

Mrs Elisha was Market Lavington School’s infant class teacher. Generations of local youngsters owe their grounding in the ‘3 Rs’ to Mrs Elisha. In 1953 (perhaps to celebrate her 50th birthday) she and her husband (also a village worthy) donated a house trophy to the school and this is now a part of the museum collection.

Photographing highly reflective objects can be difficult but here we have a close up on the cup. 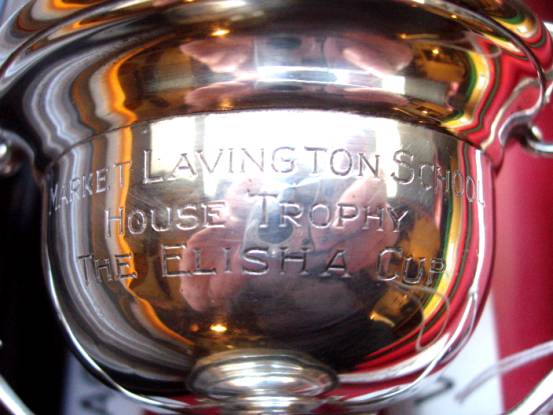 The Elisha Cup, presented by Bill and May Elisha

Mrs Elisha has already featured in these pages, and no doubt she’ll be here again.