Back in 1993 the organisers of the village festival in Market Lavington decided to hold a Victorian Evening./ The event was a miscellany of items, a bit like a ‘Music Hall’ evening.

The audience were invited, if possible, to turn up appropriately dressed. Some could whilst others had nothing to hand and so came in normal clothes. Our photo shows some of the audience. 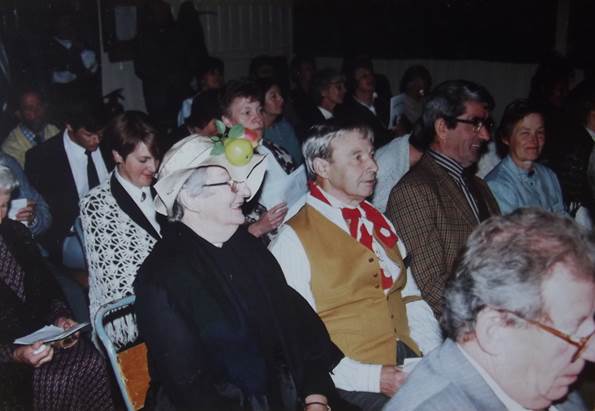 Clearly the photographer has picked out some of the audience in Victorian costume and they are none other than Peggy and Tom Gye. Peggy appears to be sporting an apple on her hat whilst Tom looks very dapper in his waistcoat and neckerchief.

As we can see, most of the audience for this event in the old Parish Room wore mufti – normal clothes.

Next to Tom is Ron Francis who had farmed at Grove Farm but we do not have names for other members of the audience.

Here’s hoping that next year, we can hold similar events in the villages, dated at around 1914 and suited to the start of World War One.